Figure 3.7. Quartiles for a Distribution

Recall the sample that was used in the previous example.

Sample: The Annual Salaries for 20 Selected Employees at a Local Company

Below are possible questions that can be answered with this five number summary.

The five-number summary is also of value because it is the basis of the boxplot. Figure 3.9 below is a vertical boxplot of the variable salaries. The first thing to consider in this graph is the box. The ends of the box locate the lower quartile and upper quartile, which in this case are 33,500 and 49,000 dollars respectively. The line in the middle of the box is the median. As you examine the box portion of the box, you should notice that the median is closer to the lower quartile than to the upper quartile. This suggests that data set is skewed and specifically skewed to the right. In this instance the largest observation is represented with an asterisk. Since this observation is an unusually large salary of $110,000, the graph identifies this observation as an outlier or unusual observation. Appropriate statistical criterion is used to determine whether or not an observation is an outlier. Lines called 'whiskers' extend from the box out to the lowest and highest observations that are not outliers. Notice that the whisker on the bottom is much shorter than the whisker on the top of this boxplot. This is another hallmark of a distribution that is skewed to the right (because the first 25% of the data covers a narrow length on the number line while the last 25% are more spread out. 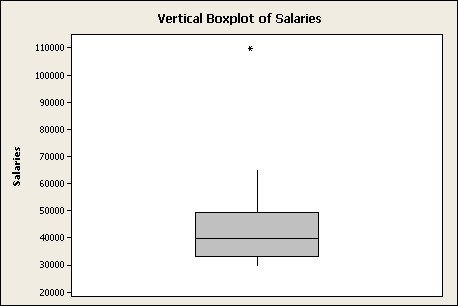 One of the most important uses of the boxplot is to compare two or more samples of one measurement variable.

The results from these questions are displayed on side-by-side boxplots found in Figure 3.10.

Four comparisons can be made with side-by-side boxplots. One can then compare the

While boxplots do not show the whole distribution like a histogram they are particularly useful for comparing groups since they are thin graphs that can easily be laid side-by-side. However, they have limits. They can not show if a distribution is bimodal or if there are spikes in the histogram at selected values. For example, if you ask a group of adults their heights you might see a bimodal distribution arising from the heights of women in a group with a lower peak and the heights of the men in an overlapping group with a higher peak. The tendency for people to round off that creates spikes in the histogram would not show up in a box plot of the same data (for example many men often say they are six feet tall when they are really 5'11").