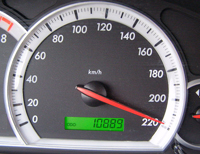 The standardized scores give you a way to compare relative standing of values on different lists where the distributions might have roughly similar shapes.

According to EPA data, 4-cylinder 2013 model year cars have CO2 emissions that average 333 ppm (parts per million) with a standard deviation of 51 ppm; while 6-cylinder cars made that year average 431 ppm with a standard deviation of 44 ppm. Which vehicle has higher CO2 emissions relative to other cars with the same number of cylinders; the 4-cylinder Honda Civic that emits 284 ppm or the 6-cylinder Toyota Camry that emits 358 ppm?