There are three key caveats that must be recognized with regard to correlation.

It is often tempting to suggest that, when the correlation is statistically significant, the change in one variable causes the change in the other variable. However, outside of randomized experiments, there are numerous other possible reasons that might underlie the correlation. Thus, it is crucial to evaluate and eliminate the key alternative (non-causal) relationships outlined in section 6.2 to build evidence toward causation.

Example 5.4: Effect of Outliers on Correlation

Below is a scatterplot of the relationship between the Infant Mortality Rate and the Percent of Juveniles Not Enrolled in School for each of the 50 states plus the District of Columbia. The correlation is 0.73, but looking at the plot one can see that for the 50 states alone the relationship is not nearly as strong as a 0.73 correlation would suggest. Here, the District of Columbia (identified by the X) is a clear outlier in the scatter plot being several standard deviations higher than the other values for both the explanatory (x) variable and the response (y) variable. Without Washington D.C. in the data, the correlation drops to about 0.5. 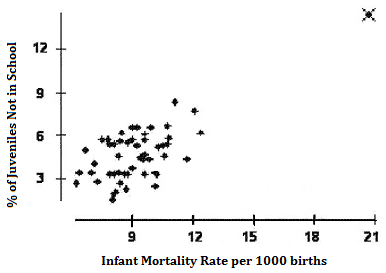 Watch the two videos below. They are similar to the video in section 5.2 except that a single point (shown in red) in one corner of the plot is staying fixed while the relationship amongst the other points is changing. Compare each with the movie in section 5.2 and see how much that single point changes the overall correlation as the remaining points have different linear relationships.

Even though outliers may exist, you should not just quickly remove these observations from the data set in order to change the value of the correlation. As with outliers in a histogram, these data points may be telling you something very valuable about the relationship between the two variables. For example, in a scatterplot of in-town gas mileage versus highway gas mileage for all 2015 model year cars, you will find that hybrid cars are all outliers in the plot (unlike gas-only cars, a hybrid will generally get better mileage in-town that on the highway).