In a Case-Control study people with the response of interest form a group of "cases" and are compared to a group of "controls" who are in similar circumstances except for the fact that they have the response. This type of study is very common in the study of factors that might be associated with uncommon diseases. 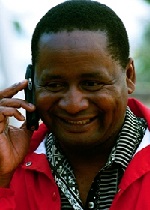 In order to study whether the longterm use of cell phones might be associated with a greater risk of brain tumors, researchers in France conducted a case-control study (see Coureau et al, 2013). In their study 253 glioma patients (a type of brain tumor) were compared as to their cell phone use with 892 matched controls of similar age who lived in the same areas (according to electoral rolls). In this way, the researchers hoped that other environmental factors associated with the differing brain tumor rates seen in differing parts of the country would be eliminated as confounders.

Notice that case-control studies are done retrospectively - they compare patients who have the disease today with those who don't and ask them about past exposures or behaviors. But people's memories might be faulty or affected by the fact that they have the disease. For example in a study of people who have arthritis, patients will often "remember" that their parents also suffered from arthritis indicating a strong genetic component. However when their non-suffering siblings with the same parents are asked the same question, no genetic component is found.

One alternative is to conduct a Prospective study in which people with different exposures or behaviors (the explanatory variables) are followed over time to see how many in each situation get the disease (the response variable).

447,357 non-Hispanic white cancer free members of the AARP who were 50 to 71 years old in 1995-1996. These subjects were followed for about ten years until the end of 2006 and during that decade 2,904 of them developed melanoma skin cancer. All of the subjects filled out a series of questionnaires at the start of the study and explanatory factors identified at that time could be examined to see if they might be associated with the onset of melanoma later in life. In one study based on this very large cohort of AARP members, Loftfield et al, 2015 found a relationship between heavy coffee drinking (4 cups a day or more) and a modest increase in the risk of getting melanoma. Of course, this observed association can not be viewed as causal since other variables associated with melanoma risk (like exposure to sunlight) might also be different between the heavy coffee drinkers and the non coffee drinkers.