In Lesson 2 we saw the value of random assignment in designed experiments. Random assignment alleviates the bias that might cause a systematic difference between groups unrelated to the treatment itself. Precautions like blinding that ensure that the subjects are treated the same during the experiment then leave us with just two possibilities for the cause of differences seen between groups. Either:

This shows the importance of addressing the concept of statistical significance. If it is very unlikely that the results of a randomized experiment are just the result of random chance, then we are left with the treatment itself as the probable cause of any relationship seen. Even in an observational study, being able to show that random chance is a poor explanation of the data is still good evidence for a true association in the population (even though it is poor evidence of causality).

This lesson focuses on Statistical hypothesis testing. In a significance test, you carry out a probability calculation assuming the null hypothesis is true to see if random chance is a plausible explanation for the data. Let's illustrate the process with an example.

Physical theory suggests that when a coin is spun on a table (rather than flipped in the air) the probability it lands heads up is less than 0.5. We are hesitant to believe this without proof.

We have two possible explanations for the data:

Null Hypothesis: The data is merely a reflection of chance variation. The probability of heads when a penny is spun is really p = 0.5

Alternative Hypothesis: The probability of heads when a penny is spun is really < 0.5.

A statistical hypothesis test is designed to answer the question: "Does the Null Hypothesis provide a reasonable explanation of the data?”

To answer this question we carry out a probability calculation. First, we can calculate a

Test Statistic = a measure of the difference between the data and what is expected when the null hypothesis is true.

Further, we can see how unusual our data is if the null hypothesis is true by finding the standard score z for the test statistic and using the normal curve:

How unusual is the value we got, assuming the null hypothesis (i.e., the real proportion is 0.5) is true? We know that standard scores of -2.6 or lower only happen about 0.5% of the time. So the null hypothesis provides a poor explanation for our data. This would seem to provide strong evidence that spinning a coin has less than a 50% chance of landing heads.

A significance test examines whether the null hypothesis provides a plausible explanation of the data. The null hypothesis itself does not involve the data. It is a statement about a parameter (a numerical characteristic of the population). These population values might be proportions or means or differences between means or proportions or correlations or odds ratios or any other numerical summary of the population. The alternative hypothesis is typically the research hypothesis of interest. Here are some examples.

Example 10.2: Hypotheses with One Sample of One Categorical Variable

About 10% of the human population is left-handed. Suppose a researcher at Penn State speculates that students in the College of Arts and Architecture are more likely to be left-handed than people found in the general population. We only have one sample since we will be comparing a population proportion based on a sample value to a known population value.

Example 10.3: Hypotheses with One Sample of One Measurement Variable

A generic brand of the anti-histamine Diphenhydramine markets a capsule with a 50 milligram dose. The manufacturer is worried that the machine that fills the capsules has come out of calibration and is no longer creating capsules with the appropriate dosage.

Example 10.4: Hypotheses with Two Samples of One Categorical Variable

Example 10.5: Hypotheses with Two Samples of One Measurement Variable

Obesity is a major health problem today. Research is starting to show that people may be able to lose more weight on a low carbohydrate diet than on a low fat diet.

Example 10.6: Hypotheses about the relationship between Two Categorical Variables

Example 10.7: Hypotheses about the relationship between Two Measurement Variables

Example 10.8: Hypotheses about comparing the relationship between Two Measurement Variables in Two Samples

Regardless of the type of hypothesis being considered, the process of carrying out a significance test is the same and relies on four basic steps:

Research Question: Are artists more likely to be left-handed than people in the general population?

Example 10.10: The Weight of McDonald's French Fries in Japan

After receiving complaints from McDonald's customers in Japan about the amount of french fries being served, the online news magazine "Rocket News" decided to test the actual of the fries served at a particular Japanese McDonald's restaurant. According to the Rocket News article, the official weight standard set by McDonald's of Japan is for a medium-sized fries to weigh 135 grams. The publication weighed the fries from ten different medium fries they purchased and found the average weight of the fries in their sample to be 130 grams with a standard deviation of 9 grams.

Research Question: Does the data suggest that the medium fries from this McDonald's in Japan are underpacked?

Significance tests are often used examine the difference between groups in comparative experiments and observational studies. We still use the same four basic steps to carry out the test.   Here are two examples.

In a September 2014 paper in the Proceedings of the National Academy of Science, researchers from Cornell University examined how the lifestyles of job candidates might affect how they are evaluated by hiring committees for academic jobs in the sciences. In this experiment 144 professors on hiring committees (80 men and 64 women) were shown two applicant files with equivalent qualifications in terms of published research, teaching abilities, and professional service. However, one file was for a divorced female candidate with two children while the other file was for a married male candidate with two children and a non-working spouse. The results of the hiring preferences exhibited are given in Table 10.1 (note - the actual research report examined a wide variety of gender and lifestyle cases - here we are only showing one comparison studied).

Research Question: Does the gender of the evaluator affect the way they would view the fictional divorced female versus the fictional married male candidates? 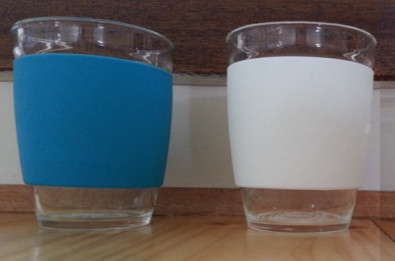 Research Question: Does the color of a mug affect the perceived aroma of the coffee inside the mug?

Explanatory variable: the color of the mug (blue or white)

Select the answer you think is correct - then click the right arrow to proceed to the next question.

Have Fun With It!

It is key to know
What p-value means --
It's the chance
(with the null)
you obtain
data that's
At least that extreme!