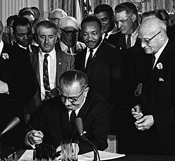 The Civil Rights Act of 1964 outlawed discriminatory practices based on race in voting rights, segregation in schools, workplace rules, and at facilities that serve the public. After a long filibuster by some southern Senators, the final bill was approved in a bipartisan vote in June of 1964.

The following tables show the results of the votes in both the Senate and the House broken down by political party and region of the country.

Use Table 6.6 above to answer the following questions (the answers are all shown in Table 6.7 - but try not to look there until you try them on your own).

Now use Table 6.6 to consider the following questions where the region represented (north or south) is taken into account (again the answers are all shown in Table 6.7 - but try not to look there until you try them on your own).

Answering the above questions leads to an interesting finding. For each chamber of Congress Democrats have a higher percentage than Republicans voting for the bill in both the North and the South (the only two possibilities), and yet they had a lower percentage overall. Look again at the numbers in Table 6.7 and you will see how that happened. Back in 1964, there was a huge imbalance in representation by region -most Southern Senators and Representatives were Democrats at the time and the negative votes were almost all associated with that region.

The relationship between Party and vote on the civil rights bill was highly affected by a third variable - the region represented. This was an example of Simpson's Paradox.

An observed association between two variables can change or even reverse direction when there is another variable that interacts strongly with both variables.

1314 women took part in a study of heart disease and smoking that was conducted in 1972-1974 in Newcastle, United Kingdom. A follow-up study of the same subjects was recently conducted nearly thirty years later. Of the 582 women who were smokers in the original study, 76.2% were still alive in the follow-up study. Of the 732 non-smokers, 68.6% were still alive twenty years later. Does this show a beneficial effect of smoking? What might have caused this counter-intuitive result?

Answer: To find the confounding factor that might be driving this paradoxical result, think about the variable most associated with dying over a two or three-decade period? Of course, the key variable associated with your survival over a 20-30 year period is your current age. The smokers were much younger women than the non-smokers at the beginning of the study (there aren't very many old smokers). For example, if you look just at those who were over 64 years old in the original study, 14% of the 49 smokers were still alive compared with 17% of the 193 non-smokers. This is another example of Simpson's Paradox (the perils of aggregation across a potential confounding factor) - a disproportionate number of nonsmokers were over the age of 64 at the beginning of the study.