7.1 - The Rules of Probability 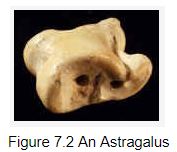 The astragalus (ankle or heel bone) of animals were used in ancient times as a forerunner of modern dice. In fact, Egyptian tomb paintings show that sheep astragali were used in board games as early as 3500 B.C. (see Figure 7.2). When a sheep astragalus is thrown into the air it can land on one of four sides, which were associated with the numbers 1, 3, 4, and 6 (see Table 7.1). Two sides (the 3 and the 4) are wider and each come up about 40% of the time, while the narrower sides (the 1 and the 6) each come up about 10% of the time. Astragali were used for gambling, games, and divination purposes by the ancients.

Toss an astragalus once. What's the chance you get a "1"?

The probability of rolling a "1" is 10%. This corresponds to the percentage of time you would get a "1" in a very long sequence of rolls. Here, we can imagine repeating the process of rolling the astragalus many times and with many rolls, the margin of error shrinks and we hone in on an expected relative frequency of times that the event we are looking for happens (getting a "1"). This illustrates the relative frequency interpretation of probability. If a chance process can be repeated independently over and over, the probability of a particular event of interest is just the long-run proportion of times that it happens.

Since probabilities can often be viewed as the proportion of times something happens we see our first rule of probability.

Rule 1: The probability that something happens must be a number between 0 and 1.

Toss an astragalus once. What's the chance you get at least a 3?

Getting "at least a 3" corresponds to getting either a 3, a 4, or a 6. These occur 40% +40%+10% = 90% of the time so the probability is 0.9. "Getting a 3" and "getting a 4" and "getting a 6" are mutually exclusive events because you can only have one of them happen at the same time (i.e. knowing one thing happened means the other could not have occurred). Our calculation of the probability of "at least a 3" illustrates our second rule of probability.
Rule 2: If outcomes cannot happen simultaneously, the probability that at least one of them occurs can be found by adding their individual probabilities.

Notice that there is another way to solve the previous problem. The opposite of "at least 3" is "getting a 1" (i.e. the only other possibility) so you can also figure the answer as 100% - 10% = 90% or 0.90. This rule of the opposites is our third rule of probability.

Suppose you toss an astralgus twice. What's the chance that you get "4s" on both tosses?

The probability that you get a 4 on the first toss is 40%. Now, when we toss the second time, the chance is still 40% that you would get a "4". Thus, getting two 4s in a row would occur 40% of 40% = 16% of the time. The calculation is just 0.40x0.40 = 0.16. Notice the assumption built into this calculation. We assume (quite reasonably in this case) that the chances don't change when we are making our second toss, regardless of how the first toss comes out.
Rule 4: If knowing how one event turns out doesn't affect the probability for a second event, then the events are said to be independent. The chance that two independent events both happen can be found by multiplying the chances.

In ancient Rome, the lowest score in tossing four astragali (getting all four 1s) was called the dog throw. What is the probability of getting a dog throw?

Example 7.2 Independent or not? Section

The highest paid employee has randomly selected from the list of Fortune 500 companies. Which of these probabilities is the largest?

Choice 'a' since all of the other choices include the fact that the event in choice 'a' happens. This is an example of our next rule of probability.
Rule 5: If the ways in which one event can happen are a subset of the ways that a second event happen, then the first event cannot have a higher probability.

While we can often think of how the process leading to data might be repeated, some events arise in situations that are not easily seen as being repeatable. In such situations, the relative frequency interpretation of probability may seem inappropriate. For example, answering a question like "What is the chance that our next President will be a woman?" would seem to require a different interpretation of the meaning of probability. Luckily, it is perfectly reasonable to assign probabilities to events outside of the relative frequency interpretation as long as they satisfy the above rules of probability. Personal probabilities that satisfy these rules give a coherent interpretation even if they might differ from one person's assignment to another's.