However, this web page contains much more information than the printable version. Click on the 'Tell Me More...' links to access the basic idea behind, examples and further references for the topics listed on this page.

Margin of Error
The Margin of Error for a sample proportion from a random sample is around \(1 / \sqrt{n}\) where n is the sample size. It does not depend on the population size.
Margin of Error

The Idea: A sample statistic is a random quantity that would come out differently if you took another sample. For an unbiased sample, the Margin of Error tells you the maximum that a sample statistic will be off from what you’d get in a census for 95% of all samples (5% of all samples would find your sample value outside that range). The Margin of Error tells you about the variability arising from the sampling – it doesn’t say anything about other types of errors that might occur like those due to bias in the procedures you use.

An Example: In October, 2015, the Gallup Poll interviewed approximately 3600 American adults, aged 18 and older and asked them “Are you feeling better about your financial situation these days, or not?” It turned out that 50% said yes, 48% said no, and 2% gave neither answer. They reported a Margin of Error (MOE) of ± 2%. If Gallup had done a similar poll of 3500 interviews, but just amongst Pennsylvania adults – the MOE would still be the same (despite the larger population in the whole country). Also, the Margin of Error goes with the square root of the sample size, so if Gallup had used a sample of just 100 people, then their MOE would be 6 times bigger.

The Idea: There are many different ways to gather a sample…

The easiest sampling plan is just the simple random sample. That's like putting everyone's name from the population into a hat and drawing your sample from that.

An Example: You want to know the opinions that the 500 bowling league participants have about the snack bar facilities of a bowling alley. To get a sample of 100 of these league players, you take a list with all 500 names and draw 100 of them at random.

Sometimes you know there are specific groups that might differ in their results and so, in a stratified sampling plan, you take separate random samples within each group.

An Example: You are conducting a poll about possible solutions to the problem of sexual assaults on campus and you know that men and women are likely to have different opinions. In a stratified sampling plan you would take a separate poll of women and men and then put those two samples together.

In a cluster sampling plan, you sample naturally occurring groups and then pick everyone within the sampled groups for your final sample.

An Example: You want a sample of students who are in one of 100 classrooms. A cluster sample might pick 10 classrooms and then question every student in those 10 classrooms.

In a systematic sample you take, say, every tenth person on a list into your sample.

An Example: You want to know what mobile carrier is being used by people waiting in line to get into a store to buy a new type of cellphone, so you interview every 5th person in the line.

Finally, there are often disastrous sampling schemes that do not allow you to gauge the probability that particular elements of the population are sampled. One type of non-probability sampling is a volunteer sample where the sample chooses itself by volunteering to participate.

An Example: You want to know how well the audience of a radio station likes the music of a new band so you advertise a toll-free number and interview anyone that calls in.

Another disastrous scheme is a convenience sampling plan where you just sample the people easiest to find and interview.

An Example: You quickly gather audience opinion about a new play by talking to everyone in the front row of an auditorium because they are the easiest to reach and talk to.

An Example: I pace off a room to measure how wide it is and come up with 15 paces. Then I state that "this room is 15 yards wide" (i.e. I am using my paces to measure yards)

The Idea: The five-number summary uses the quartiles to try to draw out the salient features of the distribution of a measurement variable. Thus, it separates the data into compartments that hold about 25% of the data each. Its values are plotted in the boxplot.

An Example: For 2013 model year cars, the EPA reports that the worst gas mileage (combining city and highway driving) was for the high-performance Bugatti Veyron that got just 10 miles per gallon (mpg). The best gas mileage was for the Toyota Prius C that got 50 mpg that year. We can see how those extremes compared to the rest of the distribution by noting that the 25th percentile amongst all 2013 model year cars was \(Q_L = 16\) mpg, the median mileage was 19 mpg, and the 75th percentile was at \(Q_U = 22\) mpg.

Of course the values in the upper tail of the distribution were more spread out (the top 25% went from 22 mpg out to 50 mpg) than the values at the low end (the bottom 25% went from 10 mpg to 16 mpg) due to the very high mileage achieved by the hybrids. This indicated a somewhat skewed to the right distribution.

The Idea: Examining the variability in a measurement is a core statistical issue. The standard deviation measures how far data values come from the mean. If there was no variability, every measurement would be the same – all being the mean value - and the standard deviation would be zero. As a rule of thumb, about 68% of the values come in a symmetric histogram come within one standard deviation of the mean. However, the standard deviation is quite sensitive to outliers so it does not provide a good measure of variation for describing a heavily skewed distribution. A resistant measure of variation is the Inter-Quartile Range (IQR). It gives the range of the middle 50% of the data by looking at how far you need to go to get from the 25th percentile to the 75th percentile. 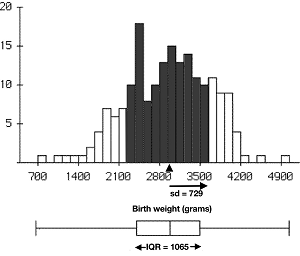 An Example: A study of risk factors associated with low infant birth weight was conducted at Baystate Medical Center in Springfield Massachusetts and found a mean birth weight of 2945 grams (that’s about 6 pounds 8 ounces: a triangle marks the position of the mean in the histogram below) with a standard deviation of 729 grams (about 26 ounces). The IQR was 3478 – 2413 = 1065 grams. A picture of the histogram and boxplot show how these measures of variability compare. In this case about 71% (shaded area in histogram) of the babies weighed within one standard deviation of the average so the rule of thumb worked pretty well.

What shape should we expect for the distribution of each of the following four variables?

Standardized Score
The z-score is equal to the value minus the average all divided by the standard deviation
Z-Scores:

The Idea: Standard scores (or z-scores) give a measure of relative standing on a list by telling you how many standard deviations above (+) or below (-) the mean you are. To interpret a standard score, first look at the sign; negative z-scores indicate a value below the mean while positive z-scores indicate a value above the mean. Next, look at the size of the number. Values within one standard deviation of the mean (z-scores between -1 and +1) are pretty common and will usually make up most of the distribution. Values outside of three standard deviations away from the mean are quite rare and indicate an extreme value either on the low side (z-scores less than -3) or extreme on the high side (z-scores bigger than +3).

An Example: NBA MVP Stephen Curry of the Golden State Warriors is an excellent free throw shooter, making about 91% of his free throws in the 2014-2015 season. That year, the league average for starting players was 78% with a standard deviation of 9%. Curry’s standard score was then \(z = (91 – 78)/9 ≈ 1.4\). You can see from his standard score that his free throwing shooting was a good deal above average. However, the distribution of free throw percentage accuracy is a skewed left distribution with a few very poor shooters being extreme outliers on the low side (e.g. DeAndre Jordan shot only 40% from the free throw line for a z-score around -4). That inflates the standard deviation and makes the interpretation of standard scores a bit more difficult. Remember, z-scores work best for symmetric histograms.

An Example: NBA superstar LeBron James formally of the Cleveland Cavaliers made only 71% of his free throws during the 2014-2015 season. This put him at the 16th percentile amongst starting players. While he excelled at many things, 84% of starting players had a greater free throw shooting accuracy.

An Example: Subjects in a study of a new diabetes treatment had an average systolic blood pressure of 130 with a standard deviation of 15 and their blood pressures approximately followed the normal curve.

Percentiles of the normal distribution depend only on standard scores (z)