Here we will be using the five step hypothesis testing procedure to compare the proportion in one random sample to a specified population proportion using the normal approximation method.

Where \(p_0\) is the hypothesized population proportion that you are comparing your sample to.

Given that the null hypothesis is true, the p value is the probability that a randomly selected sample of n would have a sample proportion as different, or more different, than the one in our sample, in the direction of the alternative hypothesis. We can find the p value by mapping the test statistic from step 2 onto the z distribution.

Note that p-values are also symbolized by \(p\). Do not confuse this with the population proportion which shares the same symbol.

We can look up the \(p\)-value using Minitab Express by constructing the sampling distribution.  Because we are using the normal approximation here, we have a \(z\) test statistic that we can map onto the \(z\) distribution. Recall, the z distribution is a normal distribution with a mean of 0 and standard deviation of 1. If we are conducting a one-tailed (i.e., right- or left-tailed) test, we look up the area of the sampling distribution that is beyond our test statistic. If we are conducting a two-tailed (i.e., non-directional) test there is one additional step: we need to multiple the area by two to take into account the possibility of being in the right or left tail.

When we reject the null hypothesis our results are said to be statistically significant.

Research Question: Are more than 80% of American's right handed?

This is a right-tailed test because we want to know if the proportion is greater than 0.80.

3. Determine the p-value associated with the test statistic

This is a right-tailed test so we need to find the area to the right of the test statistic, \(z=1.75\), on the z distribution.

\(p\leq .05\), therefore our decision is to reject the null hypothesis

Yes, there is statistical evidence to state that more than 80% of all Americans are right handed.

Research Question: Is the percentage of Creamery customers who prefer chocolate ice cream over vanilla less than 80%?

In a sample of 50 customers 60% preferred chocolate over vanilla.

This is a left-tailed test because we want to know if the proportion is less than 0.80. 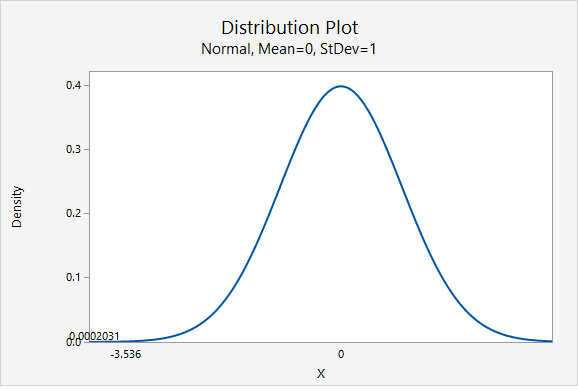 \(p \leq.05\), therefore our decision is to reject the null hypothesis.

Yes, there is evidence that the percentage of all Creamery customers who prefer chocolate ice cream over vanilla is less than 80%.

According to the Center for Disease Control (CDC), the percent of adults 20 years of age and over in the United States who are overweight is 69.0% (see http://www.cdc.gov/nchs/fastats/obesity-overweight.htm). One city’s council wants to know if the proportion of overweight citizens in their city is different from this known national proportion. They take a random sample of 150 adults 20 years of age or older in their city and find that 98 are classified as overweight. Let’s use the five step hypothesis testing procedure to determine if there is evidence that the proportion in this city is different from the known national proportion.

Research question: Is this city’s proportion of overweight individuals different from 0.690?

This is a non-directional test because our question states that we are looking for a differences as opposed to a specific direction. This will be a two-tailed test.

In Minitab Express, we find the proportion of a normal curve beyond \(\pm0.980\): 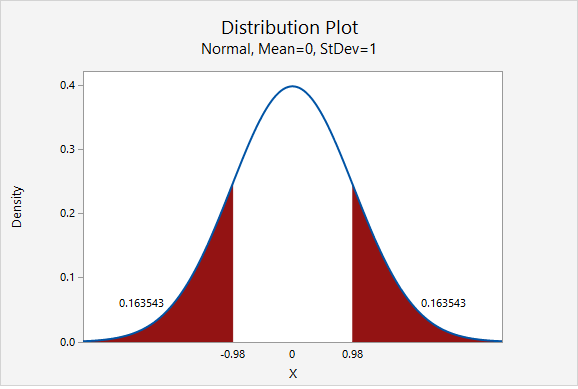 \(p>\alpha\), therefore we fail to reject the null hypothesis

There is not sufficient evidence to state that the proportion of citizens of this city who are overweight is different from the national proportion of 0.690.