In Lesson 3 you learned that a scatterplot can be used to display data from two quantitative variables. Let's review.

Variable that is used to explain variability in the response variable, also known as an independent variable or predictor variable; in an experimental study, this is the variable that is manipulated by the researcher.

The outcome variable, also known as a dependent variable.

When describing the relationship between two quantitative variables, we need to consider the following:

Scatterplots are useful tools for visualizing data. Next we will explore correlations as a way to numerically summarize these relationships.

Minitab®  – Review of Using Minitab to Construct a Scatterplot

Let's construct a scatterplot to examine the relation between quiz scores and final exam scores.

This should result in the following scatterplot: 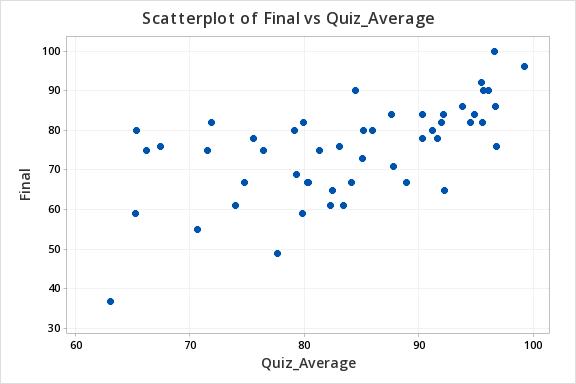