CAOS stands for Comprehensive Assessment of Outcomes in a First Statistics course. It is a measure of students' statistical reasoning skills. Here we have data from 10 students who took the CAOS at the beginning (pre-test) and end (post-test) of a statistics course.

Research question: How can we use students' pre-test scores to predict their post-test scores?

Minitab Express was used to construct a simple linear regression model. The two pieces of output that we are going to interpret here are the regression equation and the scatterplot containing the regression line. 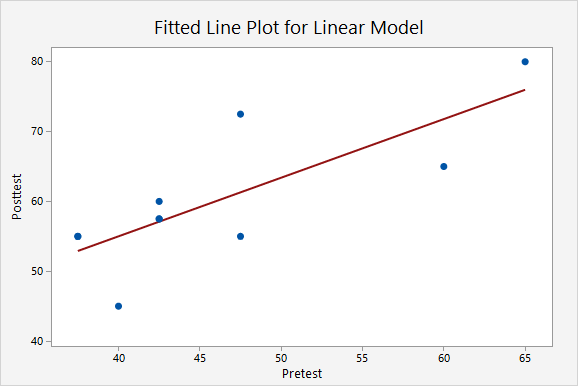 What is the regression model?

The slope is 0.8394. For every one point increase in a student's pre-test score, their predicted post-test score increases by 0.8394 points.

One student scored 60 on the pre-test and 65 on the post-test. Calculate and interpret that student's residual.

We have y.  We can compute \(\widehat y\) using the x value and regression equation that we have.

This student's residual is -6.794. They scored 6.794 points lower on the post-test than we predicted given their pre-test score.