Data must be quantitative. In order to use the t distribution to approximate the sampling distribution either the sample size must be large (\(\ge\ 30\)) or the population must be known to be normally distributed. The possible combinations of null and alternative hypotheses are:

For the test of one group mean we will be using a \(t\) test statistic:

Note that structure of this formula is similar to the general formula for a test statistic: \(\frac{sample\;statistic-null\;value}{standard\;error}\)

If \(p>\alpha\) fail to reject the null hypothesis.

Based on your decision in Step 4, write a conclusion in terms of the original research question.

The new few pages will walk you through examples before giving you the opportunity to do two on your own.

Research question: Does the average Penn State student spend more than \$300 each semester on textbooks?

Pulse rates are quantitative. The sampling distribution will be approximately normally distributed because \(n \ge 30\).

This is a two-tailed test because we want to know if the mean pulse rate is different from 72. 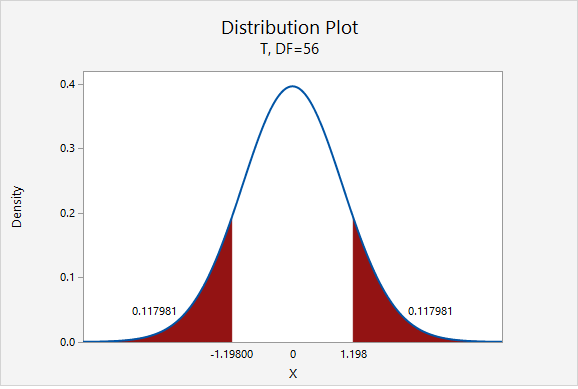 Given that the null hypothesis is true and \(\mu=72\), the probability of taking a random sample of \(n=57\) and finding a sample mean this or more extremely different is 0.235962. This is our p-value.

There is not sufficient evidence to state that the mean pulse of college men is different from 72.

In the population of Americans who drink coffee, the average daily consumption is 3 cups per day. A university wants to know if their students tend to drink more coffee than the national average. They ask a random sample of 50 students how many cups of coffee they drink each day and found \(\overline{x}=3.8\) and \(s=1.5\). Do they have evidence that their students drink more than the national average?

Amount of coffee consumed is a quantitative variable. We are given that random sampling methods were employed. Because \(n \ge 30\), we can approximate the sampling distribution using a t distribution.

This is a right-tailed test because we want to know if the mean in the sample is greater than the national average. 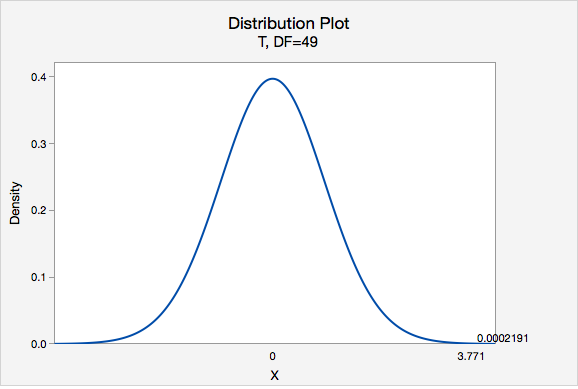 There is evidence to state the mean number of coffees consumed in the population of all students at this university is greater than 3.

According to CNN, in 2011, the average American spent \$16,803 on housing. A suburban community wants to know if their residents spent less than this national average. In a survey of 30 randomly selected residents, they found that they spent an annual average of \$15,800 with a standard deviation of \$2,600.

Housing costs are quantitative. Because \(n \ge 30\), the sampling distribution can be approximated using the \(t\) distribution.

This is a left-tailed test because we want to know if residents of this community spent less than the national average. 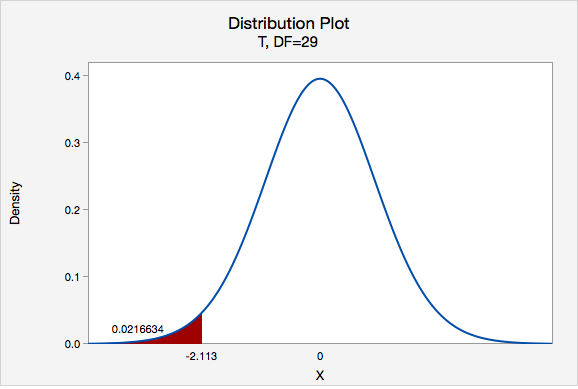 There is evidence to state that on average residents of this community spent less than the national average on housing in 2011.