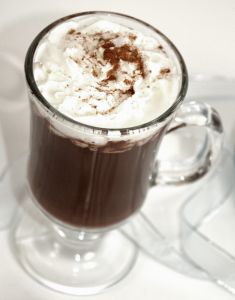 Suppose that \(X\) and \(Y\) have the following joint probability mass function:

Two questions you might have right now: 1) What does the covariance mean? That is, what does it tell us? and 2) Is there a shortcut formula for the covariance just as there is for the variance? We'll be answering the first question in the pages that follow. Well, sort of! In reality, we'll use the covariance as a stepping stone to yet another statistical measure known as the correlation coefficient. And, we'll certainly spend some time learning what the correlation coefficient tells us. In regards to the second question, let's answer that one now by way of the following theorem.

In order to prove this theorem, we'll need to use the fact (which you are asked to prove in your homework) that, even in the bivariate situation, expectation is still a linear or distributive operator:

Suppose again that \(X\) and \(Y\) have the following joint probability mass function:

Use the theorem we just proved to calculate the covariance of \(X\) and \(Y\).

Now that we know how to calculate the covariance between two random variables, \(X\) and \(Y\), let's turn our attention to seeing how the covariance helps us calculate what is called the correlation coefficient.

18.2 - Correlation Coefficient of X and Y

18.2 - Correlation Coefficient of X and Y

The covariance of \(X\) and \(Y\) necessarily reflects the units of both random variables. It is helpful instead to have a dimensionless measure of dependency, such as the correlation coefficient does.

Suppose that \(X\) and \(Y\) have the following joint probability mass function:

So now the natural question is "what does that tell us?". Well, we'll be exploring the answer to that question in depth on the page titled More on Understanding Rho, but for now let the following interpretation suffice.

On the page titled More on Understanding Rho, we will show that \(-1 \leq \rho_{XY} \leq 1\). Then, the correlation coefficient is interpreted as:

So, for our example above, we can conclude that \(X\) and \(Y\) are positively, linearly correlated, but not perfectly so.

If \(X\) and \(Y\) are independent random variables (discrete or continuous!), then:

Let's take a look at an example of the theorem in action. That is, in the example that follows, we see a case in which \(X\) and \(Y\) are independent and the correlation between \(X\) and \(Y\) is 0. 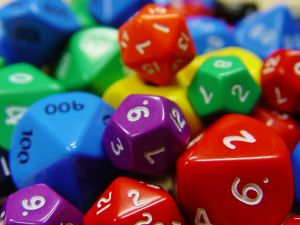 The expected value of the product \(XY\) is:

Again, this example illustrates a situation in which \(X\) and \(Y\) are independent, and the correlation between \(X\) and \(Y\) is 0, just as the theorem states it should be.

NOTE! the converse of the theorem is not necessarily true! That is, zero correlation and zero covariance do not imply independence. Let's take a look at an example that illustrates this claim.

The expected value of the product \(XY\) is also 0:

and therefore the correlation between \(X\) and \(Y\) is necessarily 0.

The contrapositive of the theorem is always true! That is, if the correlation is not zero, then \(X\) and \(Y\) are dependent. Let's take a look at an example that illustrates this claim. 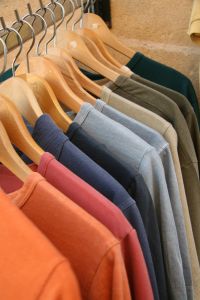 A quality control inspector for a t-shirt manufacturer inspects t-shirts for defects. She labels each t-shirt she inspects as either:

Then, the joint probability mass function of \(X\) and \(Y\) is the trinomial distribution. That is:

The expected value of the product \(XY\) is:

tells us. Since this is the last page of the lesson, I guess there is no more procrastinating! Let's spend this page, then, trying to come up with answers to the following questions:

Let's tackle the first question. How does \(\rho_{XY}\) get its sign? Well, we can get a good feel for the answer to that question by simply studying the formula for the correlation coefficient:

Suppose we were interested in studying the relationship between atmospheric pressure \(X\) and the boiling point \(Y\) of water. Then, our plot might look something like this:

The plot suggests that as the atmospheric pressure increases, so does the boiling point of water. Now, what does the plot tell us about the product:

Well, it tells us this:

The plot suggests that as IQs increase, the delinquency indices decrease. That is, there is an inverse or negative relationship. Now, what does the plot tell us about the product:

Well, it tells us this:

Each of the black dots (•) represents an element of the joint support \(S\). As we should expect with a trinomial, the support is triangular. The probabilities that \(X=x\) and \(Y=y\) are indicated in blue. For example, the probability that \(X=0\) and \(Y=1\) is \(\frac{4}{16}\). You can verify these probabilities, if you are so inclined, using the formula for the trinomial p.m.f. What we want to do here, though, is explore the correlation between \(X\) and \(Y\). Now, we'll soon see that we can learn something about the correlation \(\rho_{XY}\) by considering the best fitting line through the \((x,y)\) points in the support. Specifically, consider the best fitting line passing through the point \((\mu_X, \mu_Y)\). We don't yet know what the best fitting line is, but we could "eyeball" such a line on our graph. That's what the red line is here, an "eyeballed" best fitting line:

Then, we know that the slope of the line is rise over run. That is:

and the line is therefore of the form:

Now to find the best fitting line, we'll use the principle of least squares. That is, we'll find the slope \(b\) that minimizes the squared vertical distances between every point \((x_0, y_0)\) in the joint support \(S\) and the point on the line:

as illustrated here in green:

That is, we need to find the \(b\) that minimizes:

Before differentiating, let's start with simplifying the thing that we are trying to minimize:

Now, to find the slope \(b\) that minimizes \(K(b)\), the expected squared vertical distances, we need to differentiate \(K(b)\) with respect to \(b\), and set the resulting derivative to 0. Doing so, we get:

Now, we can substitute what we have found for the slope \(b\) into our equation:

getting the least squares regression line:

Okay, have we lost sight of what we are doing here? Remember that started way back when trying to answer three questions. Well, all of our hard work now makes the answers to the three questions rather straightforward. Let's take a look!

And because the variance \(\sigma^2_Y\) is necessarily nonnegative, that implies that:

and which finally implies that:

Phew! Done! We have now answered the third question. Let's now tackle the second and fourth questions. Why is \(\rho_{XY}\) a measure of linearrelationship? And why does \(\rho_{XY}\) close to −1 or +1 indicate a strong linear relationship? Well, we defined \(K(b)\) so that it measures the distance of the points \((x_0,y_0)\) in the joint support \(S\) to a line. Therefore, \(\rho_{XY}\) necessarily must concern a linear relationship, and no other. Now, we can take it a step further. The smaller \(K(b)\) is, the closer the points are to the line:

So, there we have it! All four questions posed, and all four questions answered! We should all now have a fairly good understanding of the value of knowing the correlation between two random variables \(X\) and \(Y\).