We'll use this result to approximate Poisson probabilities using the normal distribution. 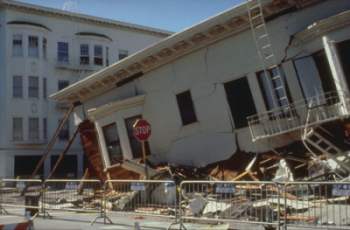 The annual number of earthquakes registering at least 2.5 on the Richter Scale and having an epicenter within 40 miles of downtown Memphis follows a Poisson distribution with mean 6.5. What is the probability that at least 9 such earthquakes will strike next year? (Adapted from An Introduction to Mathematical Statistics, by Richard J. Larsen and Morris L. Marx.)

We can, of course use the Poisson distribution to calculate the exact probability. Using the Poisson table with \(\lambda=6.5\), we get:

Now, let's use the normal approximation to the Poisson to calculate an approximate probability. First, we have to make a continuity correction. Doing so, we get:

Once we've made the continuity correction, the calculation again reduces to a normal probability calculation: