Every time we perform a hypothesis test, this is the basic procedure that we will follow:

Let's try to make this outlined procedure more concrete by taking a look at the following example. 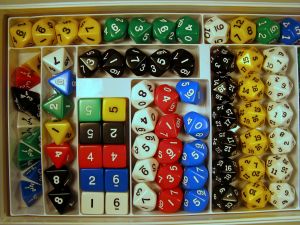 A four-sided (tetrahedral) die is tossed 1000 times, and 290 fours are observed. Is there evidence to conclude that the die is biased, that is, say, that more fours than expected are observed?

As the basic hypothesis testing procedure outlines above, the first step involves stating an initial assumption. It is:

That is, the initial assumption involves making a statement about a population proportion.

Now, the second step tells us that we need to collect evidence (data) for or against our initial assumption. In this case, that's already been done for us. We were told that the die was tossed \(n=1000\) times, and \(y=290\) fours were observed. Using statistical notation again, we write the collected evidence as a sample proportion:

Now we just need to complete the third step of making the decision about whether or not to reject our initial assumption that the population proportion is 0.25. Recall that the Central Limit Theorem tells us that the sample proportion:

follows a standard normal \(N(0,1)\) distribution. So, we can "translate" our observed sample proportion of 0.290 onto the \(Z\) scale. Here's a picture that summarizes the situation:

There are two approaches to making the decision:

Until we get to the page in this lesson titled The \(p\)-value Approach, we'll use the critical value approach. 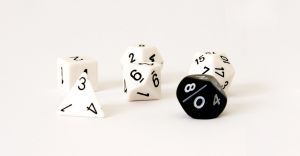 A four-sided (tetrahedral) die is tossed 1000 times, and 290 fours are observed. Is there evidence to conclude that the die is biased, that is, say, that more fours than expected are observed?

Here's a picture of such a "critical region" (or "rejection region"):

Note, by the way, that the "size" of the critical region is 0.05. This will become apparent in a bit when we talk below about the possible errors that we can make whenever we conduct a hypothesis test.

At any rate, let's get back to deciding whether our particular sample proportion appears to be too extreme. Well, it looks like we should reject the null hypothesis (our initial assumption \(p=0.25\)) because:

or equivalently since our test statistic:

Our conclusion: we say there is sufficient evidence to conclude \(H_A:p>0.25\), that is, that the die is biased.

By the way, this example involves what is called a one-tailed test, or more specifically, a right-tailed test, because the critical region falls in only one of the two tails of the normal distribution, namely the right tail.

Before we continue on the next page at looking at two more examples, let's revisit the basic hypothesis testing procedure that we outlined above. This time, though, let's state the procedure in terms of performing a hypothesis test for a population proportion using the critical value approach. The basic procedure is:

Now, back to those possible errors we can make when conducting such a hypothesis test.

So, argh! Every time we conduct a hypothesis test, we have a chance of making an error. (Oh dear, why couldn't I have chosen a different profession?!)