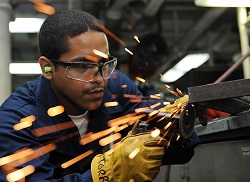 The next data set gives the number of employees (in thousands) for a metal fabricator and one of their primary vendors for each month over a 5-year period, so n = 60 (Employee data). A simple linear regression analysis was implemented:

where \(y_{t}\) and \(x_{t}\) are the number of employees during time period t at the metal fabricator and vendor, respectively. 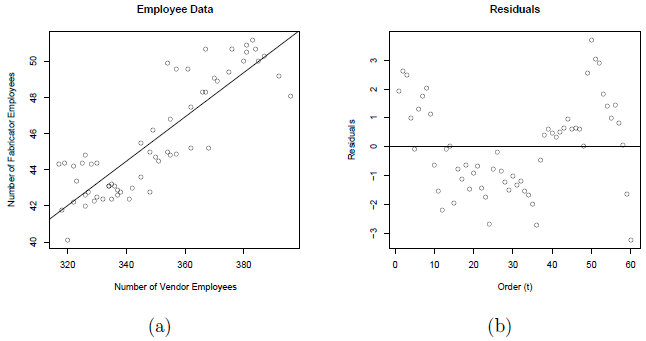 Notice the non-random trend suggestive of autocorrelated errors in the scatterplot. The estimated equation is \(y_{t}=2.85+0.12244x_{t}\), which is given in the following summary output:

The plot below gives the PACF plot of the residuals, which helps us decide the lag values. (Minitab: Store the residuals from the regression model fit then select Stat > Time Series > Partial Autocorrelation and use the stored residuals as the "Series.") 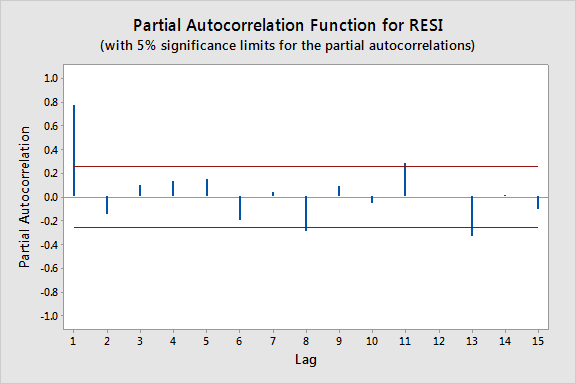 In particular, it looks like there is a lag of 1 since the lag-1 partial autocorrelation is so large and way beyond the "5% significance limits" shown by the red lines. (The partial autocorrelations at lags 8, 11, and 13 are only slightly beyond the limits and would lead to an overly complex model at this stage of the analysis.) We can also obtain the output from the Durbin-Watson test for serial correlation (Minitab: click the "Results" button in the Regression Dialog and check "Durbin-Watson statistic."):

To find the p-value for this test statistic we need to look up a Durbin-Watson critical values table, which in this case indicates a highly significant p-value of approximately 0. (In general Durbin-Watson statistics close to 0 suggest significant positive autocorrelation.) A lag of 1 appears appropriate.

Since we decide upon using AR(1) errors, we will have to use one of the procedures we discussed earlier. In particular, we will use the Cochrane-Orcutt procedure. Start by fitting a simple linear regression model with a response variable equal to the residuals from the model above and a predictor variable equal to the lag-1 residuals and no intercept to obtain the slope estimate, r = 0.831385.

The corresponding standard errors are:

Notice that the correct standard errors (from the Cochrane-Orcutt procedure) are larger than the incorrect values from the simple linear regression on the original data. If ordinary least squares estimation is used when the errors are autocorrelated, the standard errors often are underestimated. It is also important to note that this does not always happen. Underestimation of the standard errors is an "on average" tendency overall problem.

The data are from U.S. oil and gas price index values for 82 months (dataset no longer available). There is a strong linear pattern for the relationship between the two variables, as can be seen below.

We start the analysis by doing a simple linear regression. Minitab results for this analysis are given below.

The residuals in time order show a dependent pattern (see the plot below).

The slow cyclical pattern that we see happens because there is a tendency for residuals to keep the same algebraic sign for several consecutive months. We also used Stat >> Time Series >> Lag to create a column of the lag 1 residuals. The correlation coefficient between the residuals and the lagged residuals is calculated to be 0.829 (and is calculated using Stat >> Basic Stats >> Correlation, which can be seen at the bottom of the figure above).

So, the overall analysis strategy in presence of autocorrelated errors is as follows:

A Method for Adjusting the Original Parameter Estimates (Cochrane-Orcutt Method)

Parameter Estimates for the Original Model

These estimates give the sample regression model:

Correct Standard Errors for the Coefficients

Correct and incorrect estimates for the coefficients:

When calculating forecasts for time series, it is important to utilize \(\epsilon_t = \rho \epsilon_{t-1} + u_t\) as part of the process. In the U.S. oil example,

Values of \(F_t\) are computed iteratively: