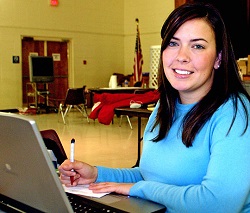 The Computer Assisted Learning New data was collected from a study of computer-assisted learning by n = 12 students.

The response is the cost of the computer time (Y) and the predictor is the total number of responses in completing a lesson (X). A scatterplot of the data is given below. 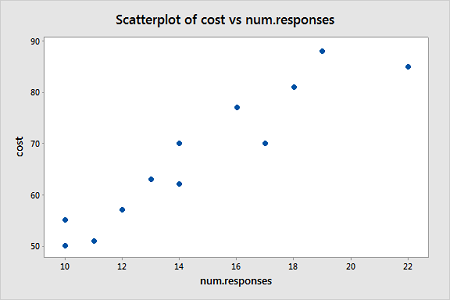 From this scatterplot, a simple linear regression seems appropriate for explaining this relationship.

First an ordinary least squares line is fit to this data.  Below is the summary of the simple linear regression fit for this data

A plot of the residuals versus the predictor values indicates possible nonconstant variance since there is a very slight "megaphone" pattern: 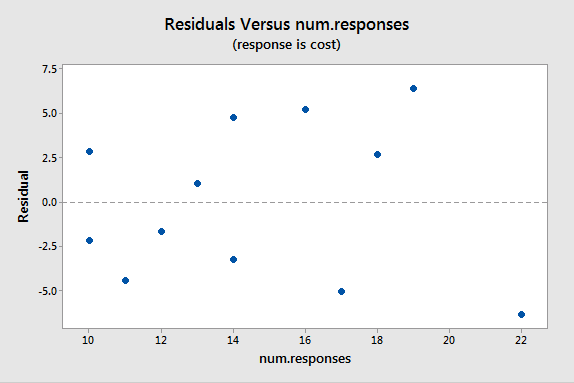 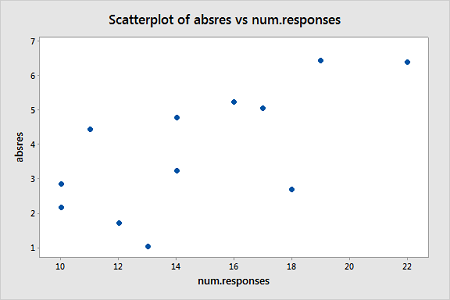 The weights we will use will be based on regressing the absolute residuals versus the predictor. Specifically, we will fit this model, use the Storage button to store the fitted values and then use Calc > Calculator to define the weights as 1 over the squared fitted values. Then we fit a weighted least squares regression model by fitting a linear regression model in the usual way but clicking "Options" in the Regression Dialog and selecting the just-created weights as "Weights."

The summary of this weighted least squares fit is as follows:

Notice that the regression estimates have not changed much from the ordinary least squares method. The following plot shows both the OLS fitted line (black) and WLS fitted line (red) overlaid on the same scatterplot. 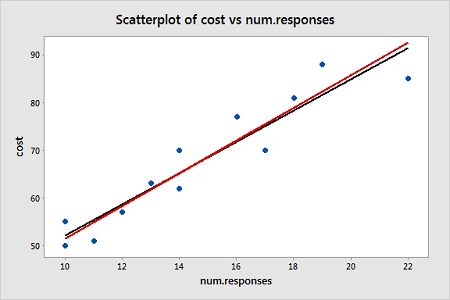 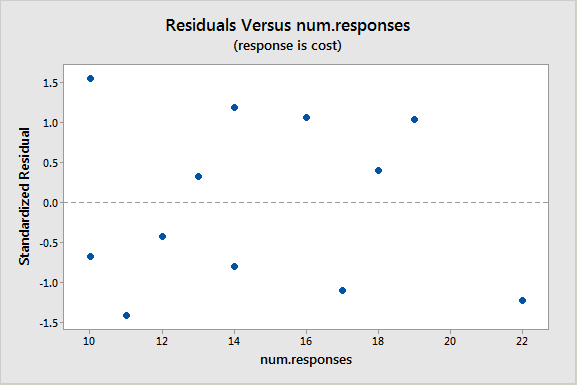 With weighted least squares, it is crucial that we use studentized residuals to evaluate the aptness of the model, since these take into account the weights that are used to model the changing variance. The usual residuals don't do this and will maintain the same non-constant variance pattern no matter what weights have been used in the analysis.

Here we have market share data for n = 36 consecutive months (Market Share data). Let Y = market share of the product; \(X_1\) = price; \(X_2\) = 1 if discount promotion in effect and 0 otherwise; \(X_2\)\(X_3\) = 1 if both discount and package promotions in effect and 0 otherwise. The regression results below are for a useful model in this situation:

A residual plot suggests nonconstant variance related to the value of \(X_2\): 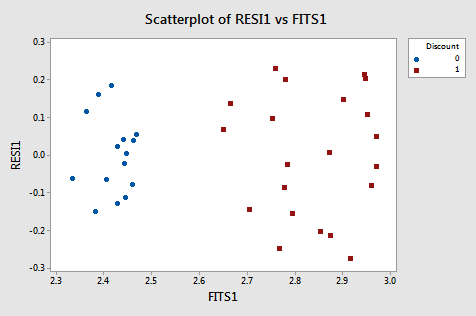 Because of this nonconstant variance, we will perform a weighted least squares analysis. For the weights, we use \(w_i=1 / \hat{\sigma}_i^2\) for i = 1, 2 (in Minitab use Calc > Calculator and define "weight" as ‘Discount'/0.027 + (1-‘Discount')/0.011 . The weighted least squares analysis (set the just-defined "weight" variable as "weights" under Options in the Regression dialog) are as follows:

Also, note how the regression coefficients of the weighted case are not much different from those in the unweighted case. Thus, there may not be much of an obvious benefit to using the weighted analysis (although intervals are going to be more reflective of the data). 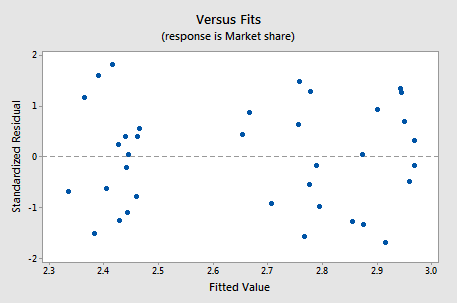 The Home Price data set has the following variables:

Since all the variables are highly skewed we first transform each variable to its natural logarithm. Then when we perform a regression analysis and look at a plot of the residuals versus the fitted values (see below), we note a slight “megaphone” or “conic” shape of the residuals. 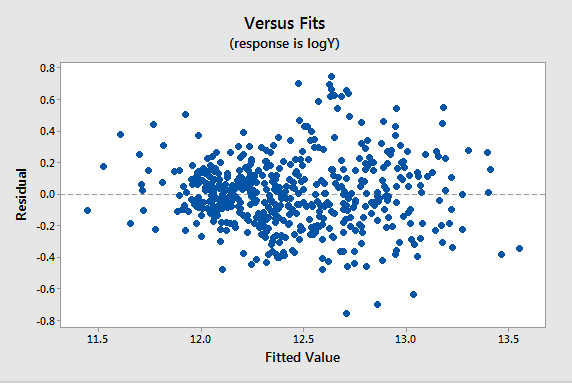 We interpret this plot as having a mild pattern of nonconstant variance in which the amount of variation is related to the size of the mean (which are the fits).

So, we use the following procedure to determine appropriate weights:

We then refit the original regression model but using these weights this time in a weighted least squares (WLS) regression.

Results and a residual plot for this WLS model: