Now, let's do a similar analysis to investigate the research question, "Is there a (linear) relationship between height and grade point average?"(Height and GPA data)

Review the following scatterplot and estimated regression line. What does the plot suggest for answering the above research question? In this case, it appears as if there is almost no relationship whatsoever. The estimated slope is almost 0. 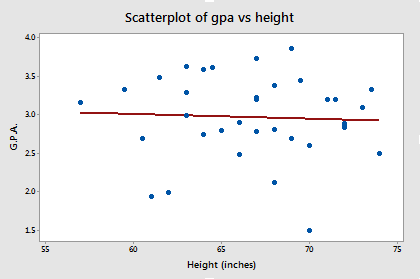 Again, we can answer the research question using the P-value of the t-test for:

As the Minitab output below suggests, the P-value of the t-test for "height" is 0.761. There is not enough statistical evidence to conclude that the slope is not 0. We conclude that there is no linear relationship between height and grade point average.

The Minitab output also shows the analysis of variable table for this data set. Again, the P-value associated with the analysis of variance F-test, 0.761, appears to be the same as the P-value, 0.761, for the t-test for the slope. The F-test similarly tells us that there is insufficient statistical evidence to conclude that there is a linear relationship between height and grade point average.

The scatter plot of grade point average and height appear below, now adorned with the three labels:

For this data set, note that the estimated regression line and the "no relationship" line are very close together. Let's see how the sums of squares summarize this point.

Some researchers at UCLA conducted a study on cyanotic heart disease in children. They measured the age at which the child spoke his or her first word (x, in months) and the Gesell adaptive score (y) on a sample of 21 children. Upon analyzing the resulting data, they obtained the following analysis of variance table:

Which number quantifies how much the observed scores vary if you don't take into account the age at which the child first spoke?

Which number quantifies how far the estimated regression line is from the "no trend" line?

Which number quantifies how much the scores vary around the estimated regression line?