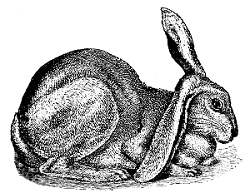 Let's investigate an example that highlights the differences between the three hypotheses that we will learn how to test in this lesson.

To investigate their hypothesis, the researchers conducted an experiment on 32 anesthetized rabbits that were subjected to a heart attack. The researchers established three experimental groups:

At the end of the experiment, the researchers measured the size of the infarcted (i.e., damaged) area (in grams) in each of the 32 rabbits. But, as you can imagine, there is great variability in the size of hearts. The size of a rabbit's infarcted area may be large only because it has a larger heart. Therefore, in order to adjust for differences in heart sizes, the researchers also measured the size of the region at risk for infarction (in grams) in each of the 32 rabbits.

With their measurements in hand (Cool Hearts data), the researchers' primary research question was:

Does the mean size of the infarcted area differ among the three treatment groups — no cooling, early cooling, and late cooling — when controlling for the size of the region at risk for infarction?

A regression model that the researchers might use in answering their research question is:

Fitting the above model to the researchers' data, Minitab reports:

A plot of the data adorned with the estimated regression equation looks like this: 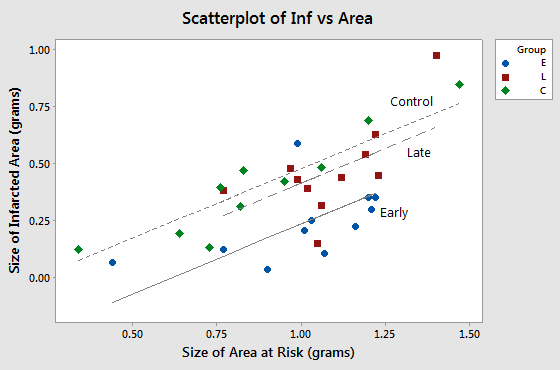 The plot suggests that, as we'd expect, as the size of the area at risk increases, the size of the infarcted area also tends to increase. The plot also suggests that for this sample of 32 rabbits with a given size of area at risk, 1.0 grams for example, the average size of the infarcted area differs for the three experimental groups. But, the researchers aren't just interested in this sample. They want to be able to answer their research question for the whole population of rabbits.

I'm hoping this example clearly illustrates the need for being able to "translate" a research question into a statistical procedure. Often, the procedure involves four steps, namely:

In this case, the researchers are interested in testing that all three slope parameters are zero. We'll soon see that the null hypothesis is tested using the analysis of variance F-test.

In this case, the researchers are interested in testing that just one of the three slope parameters is zero. You already know how to do this, don't you? Wouldn't this just involve performing a t-test for \(\beta_{1}\)? We'll soon learn how to think about the t-test for a single slope parameter in the multiple regression framework.

In this case, the researchers are interested in testing whether a subset (more than one, but not all) of the slope parameters are simultaneously zero. We will learn a general linear F-test for testing such a hypothesis.

Unfortunately, we can't just jump right into the hypothesis tests. We first have to take two side trips — the first one to learn what is called "the general linear F-test."