In our earlier discussions on multiple linear regression, we have outlined ways to check assumptions of linearity by looking for curvature in various plots.

Sometimes, a plot of the residuals versus a predictor may suggest there is a nonlinear relationship. One way to try to account for such a relationship is through a polynomial regression model. Such a model for a single predictor, X, is:

where h is called the degree of the polynomial. For lower degrees, the relationship has a specific name (i.e., h = 2 is called quadratic, h = 3 is called cubic, h = 4 is called quartic, and so on). Although this model allows for a nonlinear relationship between Y and X, polynomial regression is still considered linear regression since it is linear in the regression coefficients, \(\beta_1, \beta_2, ..., \beta_h\)!

In order to estimate the equation above, we would only need the response variable (Y) and the predictor variable (X). However, polynomial regression models may have other predictor variables in them as well, which could lead to interaction terms. So as you can see, the basic equation for a polynomial regression model above is a relatively simple model, but you can imagine how the model can grow depending on your situation!

The data was generated from the quadratic model 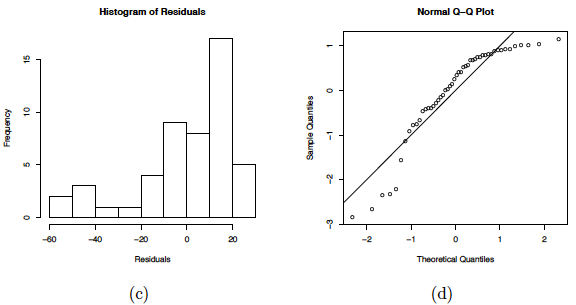 (a) Scatterplot of the quadratic data with the OLS line. (b) Residual plot for the OLS fit.

(c) Histogram of the residuals. (d) NPP for the Studentized residuals.

Residual plots of this linear regression analysis are also provided in the plot above. Notice in the residuals versus predictor plots how there is obvious curvature and it does not show uniform randomness as we have seen before. The histogram appears heavily left-skewed and does not show the ideal bell-shape for normality. Furthermore, the NPP seems to deviate from a straight line and curves down at the extreme percentiles. These plots alone suggest that there is something wrong with the model being used and indicate that a higher-order model may be needed.

The matrices for the second-degree polynomial model are:

where the entries in Y and X would consist of the raw data. So as you can see, we are in a setting where the analysis techniques used in multiple linear regression (e.g., OLS) are applicable here.

Some general guidelines to keep in mind when estimating a polynomial regression model are: