Okay, now that we know the effects that multicollinearity can have on our regression analyses and subsequent conclusions, how do we tell when it exists? That is, how can we tell if multicollinearity is present in our data?

Some of the common methods used for detecting multicollinearity include:

Looking at correlations only among pairs of predictors, however, is limiting. It is possible that the pairwise correlations are small, and yet a linear dependence exists among three or even more variables, for example, \(X_3 = 2X_1 + 5X_2 + \text{error}\), say. That's why many regression analysts often rely on what is called variance inflation factors (VIF) to help detect multicollinearity.

What is a Variation Inflation Factor?

Let's be a little more concrete. For the model in which \(x_k\) is the only predictor:

it can be shown that the variance of the estimated coefficient \(b_k\) is:

Note that we add the subscript "min" in order to denote that it is the smallest the variance can be. Don't worry about how this variance is derived — we just need to keep track of this baseline variance, so we can see how much the variance of \(b_k\) is inflated when we add correlated predictors to our regression model.

Let's consider such a model with correlated predictors:

How much larger? To answer this question, all we need to do is take the ratio of the two variances. By doing so, we obtain:

The above quantity is deemed the variance inflation factor for the \(k^{th}\) predictor. That is:

where \(R_{k}^{2}\)  is the \(R^{2} \text{-value}\) obtained by regressing the \(k^{th}\) predictor on the remaining predictors. Note that a variance inflation factor exists for each of the (p-1) predictors in a multiple regression model.

How do we interpret the variance inflation factors for a regression model? Again, it measures how much the variance of the estimated regression coefficient \(b_k\) is "inflated" by the existence of correlation among the predictor variables in the model. A VIF of 1 means that there is no correlation between the \(k^{th}\) predictor and the remaining predictor variables, and hence the variance of \(b_k\) is not inflated at all. The general rule of thumb is that VIFs exceeding 4 further warrant investigation, while VIFs exceeding 10 are signs of serious multicollinearity requiring correction.

Let's return to the Blood Pressure data set in which researchers observed the following data on 20 individuals with high blood pressure:

As you may recall, the matrix plot of BP, Age, Weight, and BSA: 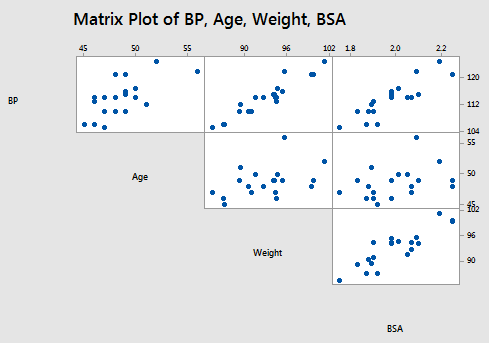 the matrix plot of BP, Dur, Pulse, and Stress: 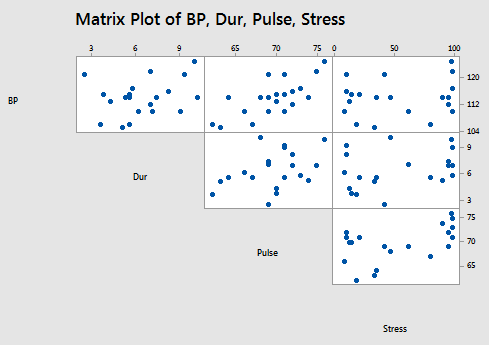 and the correlation matrix:

Regressing y = BP on all six of the predictors, we obtain:

For the sake of understanding, let's verify the calculation of the VIF for the predictor Weight. Regressing the predictor \(x_2\) = Weight on the remaining five predictors:

Minitab reports that \(R_{Weight}^{2}\) is 88.1% or, in decimal form, 0.881. Therefore, the variance inflation factor for the estimated coefficient Weight is by definition:

Again, this variance inflation factor tells us that the variance of the weight coefficient is inflated by a factor of 8.4 because Weight is highly correlated with at least one of the other predictors in the model.

So, what to do? One solution to dealing with multicollinearity is to remove some of the violating predictors from the model. If we review the pairwise correlations again:

we see that the predictors Weight and BSA are highly correlated (r = 0.875). We can choose to remove either predictor from the model. The decision of which one to remove is often a scientific or practical one. For example, if the researchers here are interested in using their final model to predict the blood pressure of future individuals, their choice should be clear. Which of the two measurements — body surface area or weight — do you think would be easier to obtain?! If weight is an easier measurement to obtain than body surface area, then the researchers would be well-advised to remove BSA from the model and leave Weight in the model.

Let's see how the researchers would do. Regressing the response y = BP on the four remaining predictors age, weight, duration, and stress, we obtain:

We’ll use the Cement data set to explore variance inflation factors. The response y measures the heat evolved in calories during the hardening of cement on a per gram basis. The four predictors are the percentages of four ingredients: tricalcium aluminate (\(x_{1} \)), tricalcium silicate (\(x_2\)), tetracalcium alumino ferrite (\(x_{3} \)), and dicalcium silicate (\(x_{4} \)). It’s not hard to imagine that such predictors would be correlated in some way.