Students in STAT 200 at Penn State were asked if they have ever driven after drinking (the dataset unfortunately no longer available). They also were asked, “How many days per month do you drink at least two beers?” In the following discussion, \(\pi\) = the probability a student says “yes” they have driven after drinking. This is modeled using X = days per month of drinking two beers. Results from Minitab were as follows.

Some things to note from the results are:

We can also obtain a plot of the estimated probability of ever having driven under the influence (\(\pi\)) versus days per month of drinking at least two beers.

The vertical axis shows the probability of ever having driven after drinking. For example, if X = 4 days per month of drinking beer, then the estimated probability is calculated as:

A few of these estimated probabilities are given in the following table:

In the results given above, we see that the estimate of the odds ratio is 1.21 for DaysBeer. This is given under Odds Ratio in the table of coefficients, standard errors, and so on. The sample odds ratio was calculated as \(e^{0.19031}\). The interpretation of the odds ratio is that for each increase of one day of drinking beer per month, the predicted odds of having ever driven after drinking are multiplied by 1.21.

Some things to note from the results are:

Finally, the results for testing with respect to the multiple logistic regression model are as follows:

Notice that since we have a p-value of 0.000 for this chi-square test, we, therefore, reject the null hypothesis that all of the slopes are equal to 0. 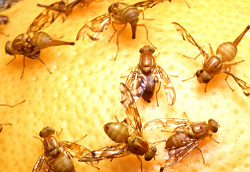 An experiment is done to test the effect of a toxic substance on insects. The data originate from the textbook, Applied Linear Statistical Models by Kutner, Nachtsheim, Neter, & Li.

At each of six dose levels, 250 insects are exposed to the substance and the number of insects that die is counted (Toxicity data). We can use Minitab to calculate the observed probabilities as the number of observed deaths out of 250 for each dose level.

A binary logistic regression model is used to describe the connection between the observed probabilities of death as a function of dose level. Since the data is in event/trial format the procedure in Minitab is a little different to before:

The Minitab output is as follows:

where X = Dose and \(\hat{\pi}\) is the estimated probability the insect dies (based on the model).

Predicted probabilities of death (based on the logistic model) for the six dose levels are given below (FITS). These probabilities closely agree with the observed values (Observed p) reported.

As an example of calculating the estimated probabilities, for Dose 1, we have

The odds ratio for Dose is 1.9621, the value under Odds Ratio in the output. It was calculated as \(e^{0.674}\). The interpretation of the odds ratio is that for every increase of 1 unit in dose level, the estimated odds of insect death are multiplied by 1.9621.

As an example of odds and odds ratio:

A property of the binary logistic regression model is that the odds ratio is the same for any increase of one unit in X, regardless of the specific values of X.