One simple nonlinear model is the exponential regression model

where the \(\epsilon_{i}\) are iid normal with mean 0 and constant variance \(\sigma^{2}\). Notice that if \(\beta_{0}=0\), then the above is intrinsically linear by taking the natural logarithm of both sides.

To illustrate, consider the example on long-term recovery after discharge from hospital from page 514 of Applied Linear Regression Models (4th ed) by Kutner, Nachtsheim, and Neter. The response variable, Y, is the prognostic index for long-term recovery and the predictor variable, X, is the number of days of hospitalization. The proposed model is the two-parameter exponential model:

where the \(\epsilon_i\) are independent normal with constant variance.

Now we can fit the nonlinear regression model: 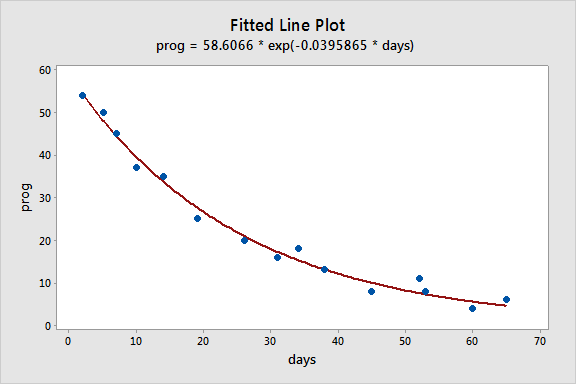