The GLM can be viewed from the regression perspective as an ordinary multiple linear regression (MLR) with ‘dummy’ coding (actually indicator coding) for the categorical treatment levels. Typically software performing the MLR will automatically include an intercept, which complicates the interpretation of the regression coefficients.

In IML, we now replace the design matrix with:

We can see something strange with this design matrix. Although we have three treatment levels in this example, we have a column of ‘1’s’ for the intercept and only two columns that have been indicator coded for treatment levels.. The reason for this is that the complete matrix

has the property that the sum of columns 2-4 will equal the first column for the intercept. As a result, a condition called singularity is created and the matrix computations will not run. So one of the treatment levels is omitted from the coding in our design matrix above for IML. It doesn’t matter which one we eliminate, although some refer to the eliminated level as a ‘reference’ level. Unlike logistic regression, the treatment level that we eliminate from the coding here does not act as a reference level for comparing other treatment levels. Its simply an algebraic manipulation. In the our design matrix for IML we have eliminated the indicator coding for treatment level3.

Re-running IML, we now get the following output;

Notice that the F statistic calculated from this model is the same as that produced from the Cell Means model.

We can confirm our ANOVA table now by running the analysis is ordinary software such as Minitab, given that we can set the coding that the software uses. In Mintab, under the Stat > ANOVA > General Linear Model, we control this by specifying Indicator (1,0) coding: 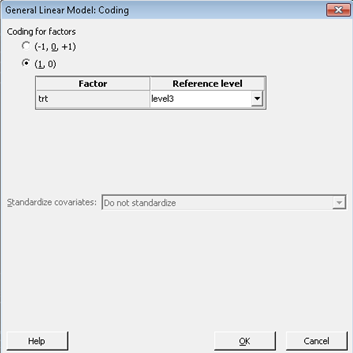 This produces the regular ANOVA output:

And also the Regression Equation

In SAS, the default coding is indicator coding, so when you specify the option

you get the regression coefficients:

And the same ANOVA table:

The Intermediate calculations for this model are: