Canonical correlation analysis is a method for exploring the relationships between two multivariate sets of variables (vectors), all measured on the same individual.

Consider, as an example, variables related to exercise and health. On one hand, you have variables associated with exercise, observations such as the climbing rate on a stair stepper, how fast you can run a certain distance, the amount of weight lifted on bench press, the number of push-ups per minute, etc. On the other hand, you have variables that attempt to measure overall health, such as blood pressure, cholesterol levels, glucose levels, body mass index, etc.  Two types of variables are measured and the relationships between the exercise variables and the health variables are of interest.

Upon completion of this lesson, you should be able to:

Similarly, you could compute all correlations between variables from the first set (e.g., exercise variables), and variables in the second set (e.g., health variables), however interpretation is difficult when pq is large.

Canonical Correlation Analysis allows us to summarize the relationships into a lesser number of statistics while preserving the main facets of the relationships. In a way, the motivation for canonical correlation is very similar to principal component analysis. It is another dimension reduction technique.

Let's begin with the notation:

We select X and Y based on the number of variables that exist in each set so that \(p ≤ q\). This is done for computational convenience.

We hope to find linear combinations that maximize the correlations between the members of each canonical variate pair.

We compute the variance of \(U_{i}\) variables with the following expression:

Similar calculations can be made for the variance of \(V_{j}\) as shown below:

The correlation between \(U_{i}\) and \(V_{j}\) is calculated using the usual formula. We take the covariance between the two variables and divide it by the square root of the product of the variances:

Let us look at each of the p canonical variates pair one by one.

This is required to obtain unique values for the coefficients.

Basically, we require that all of the remaining correlations equal zero.

This procedure is repeated for each pair of canonical variates. In general, ...

Again, requiring all of the remaining correlations to be equal to zero.

Next, let's see how this is carried out in SAS...

The example data comes from a firm that surveyed a random sample of n = 50 of its employees in an attempt to determine which factors influence sales performance. Two collections of variables were measured:

View the video explanation of the SAS code.

This is carried out using Wilks lambda. The results of this are found on page 1 of the output of the SAS Program.

Test of H0: The canonical correlations in the current row and all that follow are zero

Because Wilks lambda is significant and the canonical correlations are ordered from largest to smallest, we can conclude that at least \(\rho^*_1 \ne 0\).

Finally, we can test the significance of the third canonical variate pair.

All three canonical variate pairs are significantly correlated and dependent on one another. This suggests that we may summarize all three pairs. In practice, these tests are carried out successively until you find a non-significant result. Once a non-significant result is found, you stop. If this happens with the first canonical variate pair, then there is not sufficient evidence of any relationship between the two sets of variables and the analysis may stop.

If the first pair shows significance, then you move on to the second canonical variate pair. If this second pair is not significantly correlated then stop. If it was significant you would continue to the third pair, proceeding in this iterative manner through the pairs of canonical variates testing until you find non-significant results.

Now that we rejected the hypotheses of independence, the next step is to obtain estimates of canonical correlation.

The estimated canonical correlations are found at the top of page 1 in the SAS output as shown below:

The squared values of the canonical variate pairs, found in the last column, can be interpreted much in the same way as \(r^{2}\) values are interpreted. 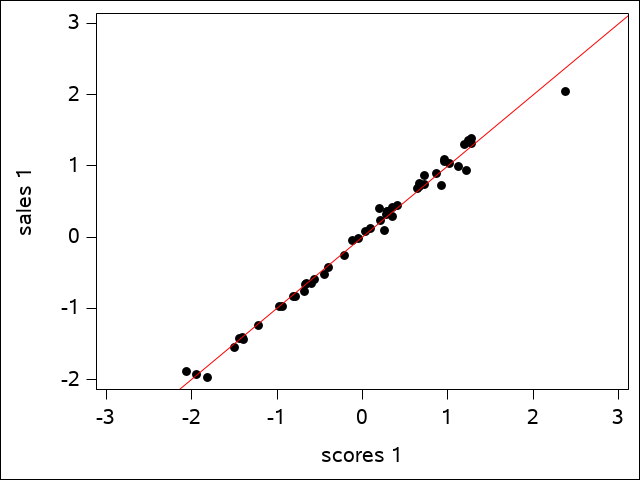 The regression line shows how well the data fits. The plot of the second canonical variate pair is a bit more scattered, but is still a reasonably good fit: 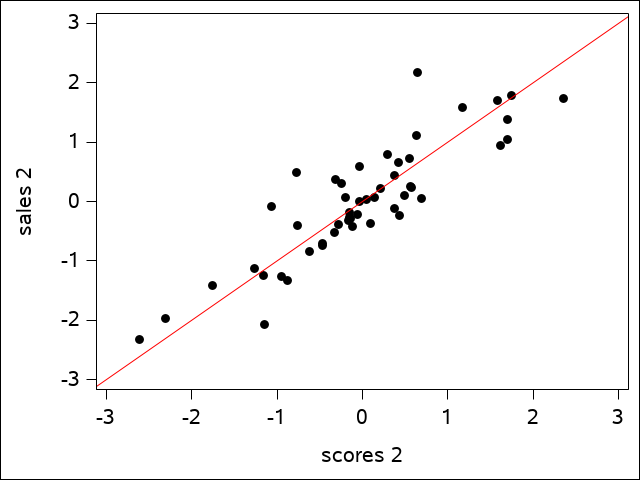 A plot of the third pair would show little of the same kind of fit.  We may refer to only the first two canonical variate pairs from this point on based on the observation that the third squared canonical correlation value is so small.

Page 2 of the SAS output provides the estimated canonical coefficients \(\left(a_{ij}\right)\) for the sales variables:

Using the coefficient values in the first column, the first canonical variable for sales is determined using the following formula:

Likewise, the estimated canonical coefficients \(\left(b_{ij}\right)\) for the test scores are located in the next table in the SAS output:

Using the coefficient values in the first column, the first canonical variable for test scores is determined using a similar formula:

In both cases, the magnitudes of the coefficients give the contributions of the individual variables to the corresponding canonical variable. However, just like in principal components analysis, these magnitudes also depend on the variances of the corresponding variables. Unlike principal components analysis, however, standardizing the data has no impact on the canonical correlations.

To interpret each component, we must compute the correlations between each variable and the corresponding canonical variate.

These results are further reinforced by looking at the correlations between each set of variables and the opposite group of canonical variates.

13.8 - Summary
In this lesson we learned about: