In this example, two columns indicate the actual condition of the subjects, diseased or non-diseased. The rows indicate the results of the test, positive or negative.

Cell A contains true positives, subjects with the disease, and positive test results. Cell D subjects do not have the disease and the test agrees.

A good test will have minimal numbers in cells B and C. Cell B identifies individuals without disease but for whom the test indicates 'disease'. These are false positives. Cell C has false negatives.

If these results are from a population-based study, prevalence can be calculated as follows:

The population used for the study influences the prevalence calculation.

Sensitivity is the probability that a test will indicate 'disease' among those with the disease:

Specificity is the fraction of those without the disease who will have a negative test result:

Sensitivity and specificity are characteristics of the test. The population does not affect the results.

A clinician and a patient have a different question: what is the chance that a person with a positive test truly has the disease? If the subject is in the first row in the table above, what is the probability of being in cell A as compared to cell B? A clinician calculates across the row as follows:

Positive and negative predictive values are influenced by the prevalence of disease in the population that is being tested. If we test in a high prevalence setting, it is more likely that persons who test positive truly have the disease than if the test is performed in a population with low prevalence.

Let's see how this works out with some numbers... 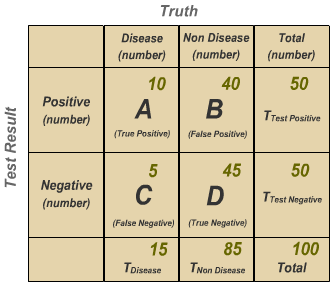 The test has 53% specificity. In other words, out of 85 persons without the disease, 45 have true negative results while 40 individuals test positive for a disease that they do not have.

The sensitivity and specificity are characteristics of this test. For a clinician, however, the important fact is among the people who test positive, only 20% actually have the disease.

For those that test negative, 90% do not have the disease.

This time we use the same test, but in a different population, a disease prevalence of 30%.

We maintain the same sensitivity and specificity because these are characteristics of this test.

Relationship between disease prevalence and predictive value in a test with 95% sensitivity and 85% specificity.
(From Mausner JS, Kramer S: Mausner and Bahn Epidemiology: An Introductory Text. Philadelphia, WB Saunders, 1985, p. 221.)

Under what circumstance would you really want to minimize the false positives?

Minimizing false positives is important when the costs or risks of follow-up therapy are high and the disease itself is not life-threatening...prostate cancer in elderly men is one example; as another, obstetricians must consider the potential harm from a false positive maternal serum AFP test (which may be followed up with amniocentesis, ultrasonography, and increased fetal surveillance as well as producing anxiety for the parents and labeling of the unborn child), against the potential benefit.

When would you want to minimize the false negatives?

What is a good test in a population? Actually, all tests have advantages and disadvantages, such that no test is perfect. There is no free lunch in disease screening and early detection.