Describe what has happened to the population under study. Show the trend over time for the potential outbreak, its geographic extent (place), and the populations (people) affected by the disease. Begin to assess the outbreak in light of what is known about the disease (e.g., the usual source, mode of transmission, risk factors, and populations affected) and start developing causal hypotheses. Familiarizing yourself with the data also helps sort out which information is reliable and informative (e.g., the same unusual exposure reported by many of the people affected) vs. what may not be as reliable (e.g., many missing or "don't know" responses to a particular question).

Come up with an answer to this question and then click on the button below to reveal the answer.

How did early exploration of the data in the Salmonella example lead to finding the source of the outbreak?

When the MN DOH reviewed data from interviewing four cases, it was noted that all 4 had consumed Banquet pot pies during the week prior to illness. This information was passed on to the outbreak team and specific questions about pot pie consumption were then included in the case-control study.

Continue to update the descriptive epidemiology, looking for errors and clues, as data are collected. Keep the investigation moving quickly and headed in the right direction.

Characterizing by time: Constructing an Epi-Curve

An epidemic curve, frequently referred to as an 'epi-curve', is used to examine and characterize the occurrence of a possible outbreak. By constructing and examining an accurate epi-curve, an investigator can consider questions such as:

An epi-curve is a histogram with the number of cases of the adverse health outcome on the y-axis (ordinate) and dates of onset of the outcome on the x-axis (abscissa). Dates of onset may grouped by days, weeks or months, depending on the nature of the potential outbreak. A typical time period used is 1/4 to 1/3 the incubation period for the disease. If the incubation or lag time from exposure to outcome is unknown, it is valuable to experiment with different lengths of time.

A typical epi-curve is a simple chart with one series of data, the onset of cases. In other situations, several layers of data are displayed on the curve. For example, the investigator may want to examine the date of onset in more than one location (e.g. 2 or more cities, states or countries) or in different groups of people (e.g. stratified by age or race).

Another variation of the epi-curve is stacking the bars in order to show different characteristics of the cases. For example, you may decide to separate confirmed cases from suspect cases, using stacked bars to assess whether an outbreak is truly occurring.

The following example depicts the first outbreak of Legionnaires’ disease, in Philadelphia, Pennsylvania, in 1976. 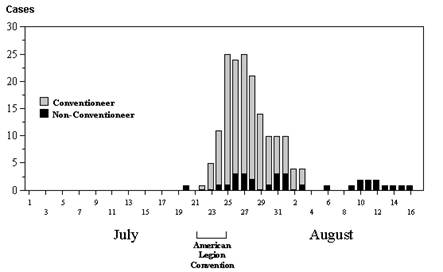 The first consideration is the overall shape of the curve which is determined by the pattern of the outbreak (common source or person-to-person transmission). The shape also indicates the period of time over which susceptible people are exposed and the minimum, average and maximum incubation periods for the disease.

Come up with an answer to this question and then click on the button below to reveal the answer.

Consider the figure above describing the first outbreak of Legionnaire's disease among the conventioneers. The curve has a steep upward slope and a gradual downward slope. Do you think this was a single source (point source) epidemic or person-to-person transmission? What is the incubation period?

Single source. Conventioneers were exposed to the same source over a relatively brief period. Any sudden rise in the number of cases suggests sudden exposure to a common source. In a point source epidemic, all the cases occur within one incubation period. The graph supports an incubation period for Legionnaire's that is less than 2 weeks.

If the duration of exposure is prolonged, the epidemic is called a "continuous common source epidemic," and the epidemic curve will have a plateau instead of a peak. Person-to-person spread (a "propagated" epidemic) should have a series of progressively taller peaks one incubation period apart.

Cases that stand apart ("outliers") provide valuable information. An early case can represent a background (unrelated) case, a source of the epidemic, or a person who was exposed earlier than others. Similarly, late cases may be unrelated to the outbreak, may have especially long incubation periods, may indicate exposure later than most of the people affected, or may be secondary cases (the person who becomes ill after being exposed to someone who was part of the initial outbreak). Examine any outliers that are part of the outbreak carefully because they may point directly to the source. For example, a prep chef could be the first case of strep in an epidemic among party-goers eating food prepared by this person.

In a point-source epidemic of a disease with a known incubation period, the epidemic curve can also identify the likely period of exposure.

Go through this exercise from CDC to learn more about constructing and interpreting epi-curves.

A simple technique for looking at geographic patterns is to plot on a 'spot map' the locations where the affected people live, work, or may have been exposed. A map of cases in a community may show clusters or patterns that reflect water supplies, wind currents, or proximity to a restaurant or grocery store. A classic example is John Snow's detection of the Broad St. water pump as the source of a cholera epidemic. On a spot map of a hospital, nursing home, or other residential facility, clustering may indicate either a primary source or person-to-person spread. Scattering of cases throughout a facility is more consistent with a common source such as a dining hall.

If the size of the overall population varies among the areas being compared, the spot map with numbers of cases can be misleading. Indicating the proportion affected or the attack rate for each area would be a better approach.

Define the populations at risk for the disease by characterizing an outbreak by personal characteristics such as age, race, sex, medical status, etc and/or by exposures (e.g., occupation, leisure activities, use of medications, tobacco, drugs, etc.). Age and sex are characteristics often strongly related to exposure and risk; thus these factors are often assessed first. Other factors to be assessed are those possibly related to susceptibility to the disease and to opportunities for exposure for the disease being investigated and in the setting of the outbreak.

After characterizing an outbreak by time, place, and person, summarize and consider whether your initial hypotheses explains the outbreak or whether new hypotheses must be developed.