Each dimension of X is denoted by \(X_j\) and is referred to as a feature or an independent (predictor) variable or simply, variable, (depending on what area of study you are from).

The response is available only when learning is supervised.

The Nature of Data Sets

Identify the response and the predictor variables as well as the variable type.

Regression
The response Y is quantitative

Classification
The response is qualitative, or categorical

A 'good' predictive model developed using the training data must also work well on the test data. This may seem to be true by default, but it is not! While fitting the training data the model should not be too close to the data because, in the future, when new data is obtained there is no guarantee that they will be an exact replica of the training data. Hence is the need for the model to be robust.

A simpler model, therefore, tends to be more robust compared to a complex one, in the sense that it may have high predictive power. A complex model may follow the pattern in the training data too closely and hence its performance in the test data may be worse. On the other hand, a simple model does not fit the training data aggressively. Hence there is always a trade-off which is manifested through the following equivalent concepts.

An overfitted model follows the training data too closely. It may have low bias but its variance will be high. This indicates that the predictor works very well on the training data but it performs substantially worse on the test data.

An empirical risk is the error rate based on the training data. If the model is more complex, then it tends to yield a smaller empirical risk but at the same time it is less robust, i.e., has higher variance.  Some classification method, such as support vector machine, directly trade off empirical risk and model complexity.

Note that all of the above concepts summarizes one single concept --- A learning algorithm has to strike a perfect balance between being complex and robust so that it performs the best possible way in the training as well as in the test sample.

Below is a very interesting figure from "The Elements of Statistical Learning" which tries to explain the above ideas. Note that the static diagram is attempting to capture something that is very dynamic.

The Truth at the center of the blue circle is what the data mining process tries to get at. Unfortunately, the truth is not revealed to the practitioner! What is given is a sample dataset which has an empirical distribution, possibly contained anywhere in the blue circle.

Although the larger model space is on average better (smaller bias), the particular model is more likely to be poor because the variation from the average is high.

From a historical perspective, there are two ends of the spectrum regarding learning or classification. At one end lie simple models that are very constrained. On the other end, there are very complex models that could be extremely flexible. Over the years research activities have been pushing forward a compromise or balance between model complexity and flexibility. Regularization is added to the complex models on one side, and model extension is made to the simple models on the other. Striking the perfect balance is the name of the game! 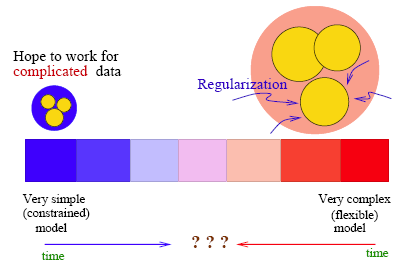