10.1 - When Data is Linearly Separable

Let us start with a simple two-class problem when data is clearly linearly separable as shown in the diagram below. 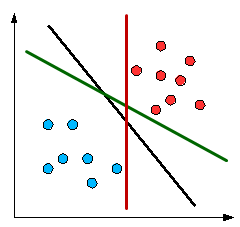 Let the i-th data point be represented by (\(X_i\), \(y_i\)) where \(X_i\) represents the feature vector and \(y_i\) is the associated class label, taking two possible values +1 or -1. In the diagram above the balls having red color has class label +1 and the blue balls have a class label -1, say. A straight line can be drawn to separate all the members belonging to class +1 from all the members belonging to the class -1. The two-dimensional data above are clearly linearly separable.

In fact, an infinite number of straight lines can be drawn to separate the blue balls from the red balls.

The problem, therefore, is which among the infinite straight lines is optimal, in the sense that it is expected to have minimum classification error on a new observation. The straight line is based on the training sample and is expected to classify one or more test samples correctly.

As an illustration, if we consider the black, red and green lines in the diagram above, is any one of them better than the other two? Or are all three of them equally well suited to classify? How is optimality defined here? Intuitively it is clear that if a line passes too close to any of the points, that line will be more sensitive to small changes in one or more points. The green line is close to a red ball. The red line is close to a blue ball. If the red ball changes its position slightly, it may fall on the other side of the green line. Similarly, if the blue ball changes its position slightly, it may be misclassified. Both the green and red lines are more sensitive to small changes in the observations. The black line on the other hand is less sensitive and less susceptible to model variance.

A separating hyperplane in two dimension can be expressed as

Hence, any point that lies above the hyperplane, satisfies

and any point that lies below the hyperplane, satisfies

Note that the maximal margin hyperplane depends directly only on these support vectors. 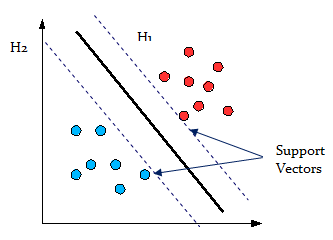 For a general n-dimensional feature space, the defining equation becomes

If the vector of the weights is denoted by \(\Theta\) and \(|\Theta|\) is the norm of this vector, then it is easy to see that the size of the maximal margin is \(\dfrac{2}{|\Theta|}\). Finding the maximal margin hyperplanes and support vectors is a problem of convex quadratic optimization. It is important to note that the complexity of SVM is characterized by the number of support vectors, rather than the dimension of the feature space. That is the reason SVM has a comparatively less tendency to overfit. If all data points other than the support vectors are removed from the training data set, and the training algorithm is repeated, the same separating hyperplane would be found. The number of support vectors provides an upper bound to the expected error rate of the SVM classifier, which happens to be independent of data dimensionality. An SVM with a small number of support vectors has good generalization, even when the data has high dimensionality.