There is a very powerful idea in the use of subsamples of the data and in averaging over subsamples through bootstrapping.

Bagging exploits that idea to address the overfitting issue in a more fundamental manner. It was invented by Leo Breiman, who called it "bootstrap aggregating" or simply "bagging" (see the reference: "Bagging Predictors," Machine Learning, 24:123-140, 1996, cited by 7466).

In a classification tree, bagging takes a majority vote from classifiers trained on bootstrap samples of the training data.

Algorithm: Consider the following steps in a fitting algorithm with a dataset having N observations and a binary response variable.

Although there remain some important variations and details to consider, these are the key steps to producing "bagged'' classification trees. The idea of classifying by averaging over the results from a large number of bootstrap samples generalizes easily to a wide variety of classifiers beyond classification trees.

Large margins are desirable because a more stable classification is implied. Ideally, there should be large margins for all of the observations. This bodes well for generalization to new data.

To get a better evaluation of the model, the prediction error is estimated only based on the "out-of-bag'' observations. In other words, the averaging for a given observation is done only using the trees for which that observation was not used in the fitting process.

Why Bagging Works? The core of bagging's potential is found in the averaging over results from a substantial number of bootstrap samples. As a first approximation, the averaging helps to cancel out the impact of random variation. However, there is more to the story, some details of which are especially useful for understanding a number of topics we will discuss later.

The following three figures are three classification trees constructed from the same data, but each using a different bootstrap sample. 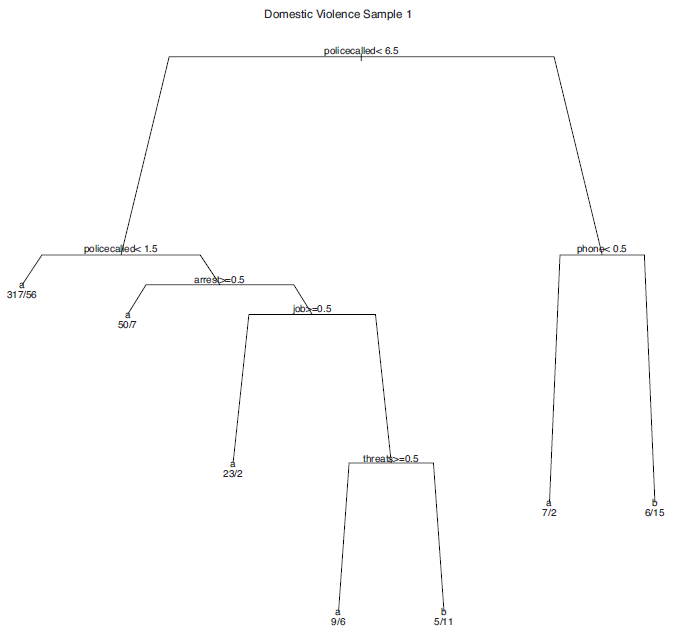 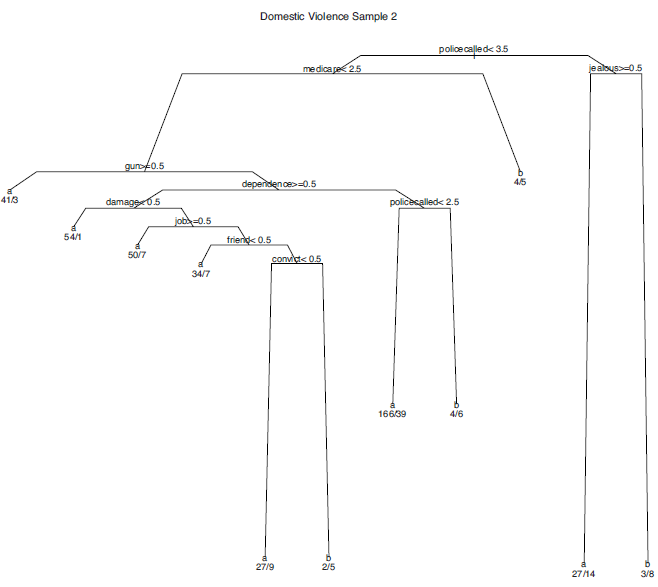 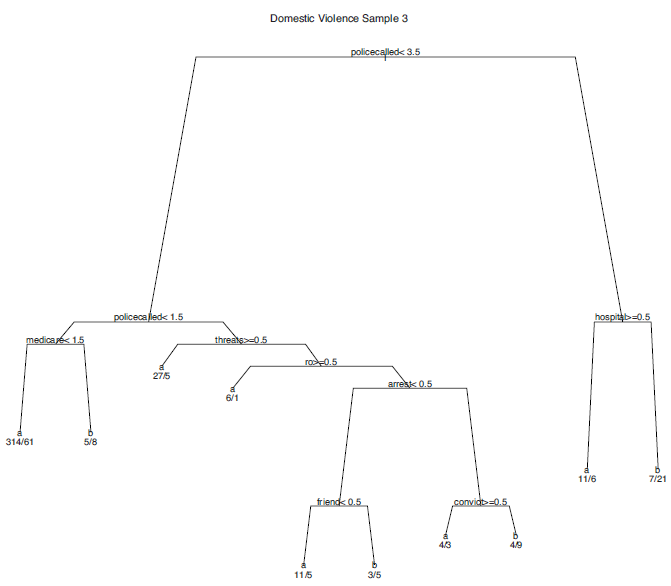 The same phenomenon can be found in conventional regression when predictors are highly correlated. The regression coefficients estimated for particular predictors may be very unstable, but it does not necessarily follow that the fitted values will be unstable as well.

It is not clear how much bias exists in the three trees. But it is clear that the variance across trees is large. Bagging can help with the variance. The conceptual advantage of bagging is to aggregate fitted values from a large number of bootstrap samples. Ideally, many sets of fitted values, each with low bias but high variance, may be averaged in a manner that can effectively reduce the bite of the bias-variance tradeoff. The ways in which bagging aggregates the fitted values are the basis for many other statistical learning developments.

Recall that a regression tree maximizes the reduction in the error sum of squares at each split. All of the concerns about overfitting apply, especially given the potential impact that outliers can have on the fitting process when the response variable is quantitative. Bagging works by the same general principles when the response variable is numerical.

In R, the bagging procedure (i.e., bagging() in the ipred library) can be applied to classification, regression, and survival trees.

We can also use the random forest procedure in the "randomForest" package since bagging is a special case of random forests.