Motivation: too many predictors

One way out of this situation is to abandon the requirement of an unbiased estimator.

We assume only that X's and Y have been centered so that we have no need for a constant term in the regression:

could be improved by adding a small constant value \( \lambda \) to the diagonal entries of the matrix \(X'X\) before taking its inverse.

The result is the ridge regression estimator

Ridge regression places a particular form of constraint on the parameters \( \left(\beta\text{'s}\right)\): \(\hat{\beta}_{ridge}\) is chosen to minimize the penalized sum of squares: 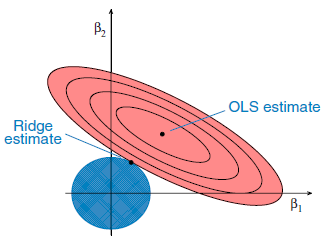 The ellipses correspond to the contours of the residual sum of squares (RSS): the inner ellipse has smaller RSS, and RSS is minimized at ordinal least square (OLS) estimates.

We are trying to minimize the ellipse size and circle simultaneously in the ridge regression. The ridge estimate is given by the point at which the ellipse and the circle touch.

An important concept in shrinkage is the "effective'' degrees of freedom associated with a set of parameters. In a ridge regression setting:

Since \( \lambda \) is applied to the squared norm of the β vector, people often standardize all of the covariates to make them have a similar scale. Assume \( \beta_j \) has the prior distribution \( \beta_j \sim_{iid} N(0,\sigma^2/\lambda)\). A large value of \( \lambda \) corresponds to a prior that is more tightly concentrated around zero and hence leads to greater shrinkage towards zero.

Whereas the least squares solutions \(\hat{\beta}_{ls} = (X'X)^{-1} X' Y\) are unbiased if model is correctly specified, ridge solutions are biased, \(E(\hat{\beta}_{ridge}) \neq \beta\). However, at the cost of bias, ridge regression reduces the variance, and thus might reduce the mean squared error (MSE).

where \(\textbf{u}_j\) are the normalized principal components of X.

We saw this in the previous formula. The larger λ is, the more the projection is shrunk in the direction of \(u_j\). Coordinates with respect to the principal components with a smaller variance are shrunk more.

Let's take a look at this geometrically.

This interpretation will become convenient when we compare it to principal components regression where instead of doing shrinkage, we either shrink the direction closer to zero or we don't shrink at all. We will see this in the "Dimension Reduction Methods" lesson.