Suppose that at time \(t\) = T (where T will be known), there has been an intervention to a time series. By intervention, we mean a change to a procedure, or law, or policy, etc. that is intended to change the values of the series \(x_{t}\). We want to estimate how much the intervention has changed the series (if at all). For example, suppose that a region has instituted a new maximum speed limit on its highways and wants to learn how much the new limit has affected accident rates.

Intervention analysis in time series refers to the analysis of how the mean level of a series changes after an intervention, when it is assumed that the same ARIMA structure for the series \(x_{t}\) holds both before and after the intervention.

with the usual assumptions about the error series \(w_{t}\).

Then the overall model, including the intervention effect, may be written as

Permanent constant change to the mean level: An amount has been added (or subtracted) to each value after time T.

Brief constant change to the mean level: There may be a temporary change for one or more periods, after which there is no effect of the intervention.

Gradual increase or decrease to a new mean level: There may be a gradually increasing amount that is added (or subtracted) which eventually levels off at a new level (compared to the “before” level).

Initial change followed by gradual return to the no change: There may be an immediate change to the values of the series, but the amount added or subtracted to each value after time T approaches 0 over time.

Models for the Patterns

Two parts of the overall model have to be estimated – the basic ARIMA model for the series and the intervention effect. Several approaches have been proposed. One approach has the following steps:

What we do after step 4 depends on available software. If the right program is available we can use all of the data to estimate the overall model that combines the ARIMA for the series and the intervention model. Otherwise, we might use only the differences from step 4 above to make estimates of the magnitude and nature of the intervention.

North Carolina Highway Fatality Rates, monthly for n = 86 months. Beginning at month = 71 the maximum speed limit was lowered from 70 mph to 55 mph. The fatality rate is computed as highway fatalities per 100 million miles of travel. A time series plot follows. The latter part of the series, in red, is the fatality rate after the change in speed limit. 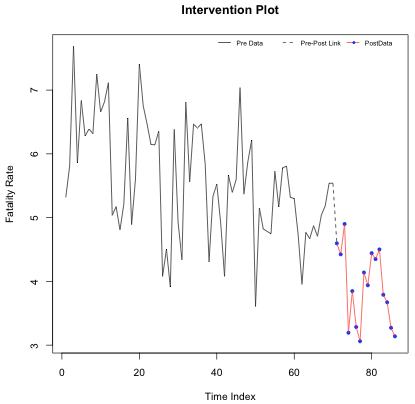 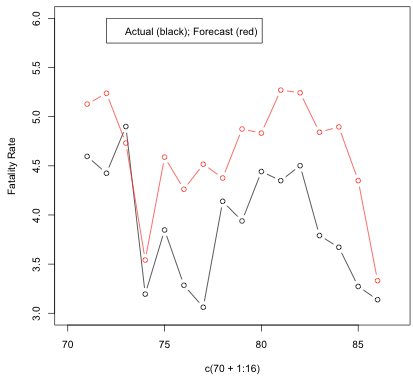 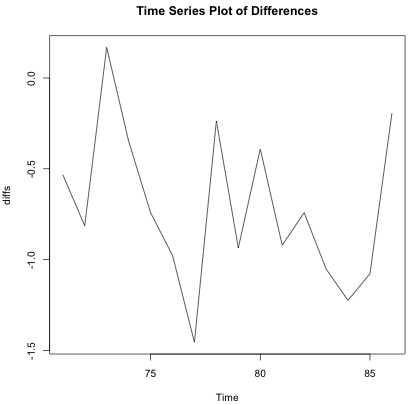 It’s difficult to judge the mean intervention pattern exactly. It’s possible that a constant mean change may describe the situation. The mean difference between actual and forecasted in the intervention period is -0.7168515.

We’ll learn how to do things in R in the homework for this week.