We previously discussed the periodogram, a function/graph that displays information about the periodic components of a time series. Any time series can be expressed as a sum of cosine and sine waves oscillating at the fundamental (harmonic) frequencies = j/n, with j = 1, 2, …, n/2. The periodogram gives information about the relative strengths of the various frequencies for explaining the variation in the time series.

Suppose that \(\gamma(h)\) is the autocovariance function of a stationary process and that \(f(\omega)\) is the spectral density for the same process. In the notation of the previous sentence, h = time lag and \(\omega\) = frequency.

The autocovariance and the spectral density have the following relationships:

In the language of advanced calculus, the autocovariance and spectral density are Fourier transform pairs. We won’t worry about the calculus of the situation. We’ll focus on the estimation of the spectral density – the frequency domain characterization of a series. The Fourier transform equations are only given here to establish that there is a direct link between the time domain representation and the frequency domain representation of a series.

Mathematically, the spectral density is defined for both negative and positive frequencies. However, due to symmetry of the function and its repeating pattern for frequencies outside the range -1/2 to +1/2, we only need to be concerned with frequencies between 0 and +1/2.

Methods for Estimating the Spectral Density

One possible improvement to the periodogram estimate of the spectral density is to smooth it using centered moving averages.  An additional “smoothing” can be created using tapering methods which weight the ends (in time) of the series less than the center of the data. We’ll not cover tapering in this lesson. Interested parties can see Section 4.4 in the book and various Internet sources.

An alternative approach to smoothing the periodogram is a parametric estimation approach based on the fact that any stationary time series can be approximated by an AR model of some order (although it might be a high order). In this approach a suitable AR model is found, and then the spectral density is estimated as the spectral density for that estimated AR model.

The usual method for smoothing a periodogram has such a fancy name that it sounds difficult. In fact, it’s merely a centered moving average procedure with a few possible modifications. For a time series, the Daniell kernel with parameter m is a centered moving average which creates a smoothed value at time \(t\) by averaging all values between times \(t\) – m and \(t\) +m (inclusive). For example, the smoothing formula for a Daniell kernel with m = 2 is

In R, the weighting coefficients for a Daniell kernel with m = 2 can be generated with the command kernel("daniell", 2). The result is

The subscripts for coef [ ] refer to the time difference from the center of the average at time \(t\). Thus the smoothing formula in this instance is

which is the same as the formula given above.

In R, the command kernel("modified.daniell", 2) will list the weighting coefficients just used.

This is the average of the smoothed values within two time periods of time \(t\), in either direction.

In R, the command kernel("daniell",c(2,2)) will supply the coefficients that would be applied to as weights in averaging the original data values for a convoluted Daniell kernel with m = 2 in both smoothings. The result is

This generates the smoothing formula

A convolution of the modified method in which the end points have less weight is also possible. The command kernel("modified.daniell",c(2,2)) gives these coefficients:

Thus the center values are weighted slightly more heavily than in the unmodified Daniell kernel.

There are L = 2m+1 fundamental frequency values in the range (j-m)/n to (j+m)/n, the range of values used for smoothing. The bandwidth for the smoothed periodogram is defined as

The bandwidth is a measure of the width of the frequency interval(s) used for smoothing the periodogram.

When unequal weights are used in the smoothing, the bandwidth definition is modified. Denote the smoothed periodogram value at \(\omega_j\) = j/n as

The hk are the possibly unequal weights used in the smoothing. The bandwidth formula is then modified to

Actually, this formula works for equal weights too.

The bandwidth should be sufficient to smooth our estimate, but if we use a bandwidth that is too great, we’ll smooth out the periodogram too much and miss seeing important peaks. In practice, it usually takes some experimentation to find the bandwidth that gives a suitable smoothing.

The bandwidth is predominately controlled by the number of values that are averaged in the smoothing. In other words, the m parameter for the Daniell kernel and whether the kernel is convoluted (repeated) affect the bandwidth.

Note! The bandwidths R reports with its plots don’t match the values that would be calculated using the formulas above. Please see the footnote on p. 190 of your text for an explanation.

As an example, suppose that the observed series is named x and we wish to smooth the periodogram using a Daniell kernel with m = 4. The commands are

The first command creates the weighting coefficients needed for the smoothing and stores them in a vector named k.  (It’s arbitrary to call it k. It could be called anything.) The second command asks for a spectral density estimate based on the periodogram for the series x, using the weighting coefficients stored in k and the plot will be on an ordinary scale, not a log scale.

If a convolution is desired, the kernel command could be modified to something like

There are two possible ways to achieve a modified Daniell kernel. You can either change the kernel command to refer to the “modified.daniell” rather than “daniell” or you can skip using the kernel command and use a spans parameter in the mvspec command.

This example will use the fish recruitment series that’s used in several places in the text, including several places in chapter 4. The series consists of n = 453 monthly values of a measure of a fish population in a southern hemisphere location. The data are in the file recruit.dat.

Note!
In the command just given we have omitted the parameter that gives weights for smoothing. 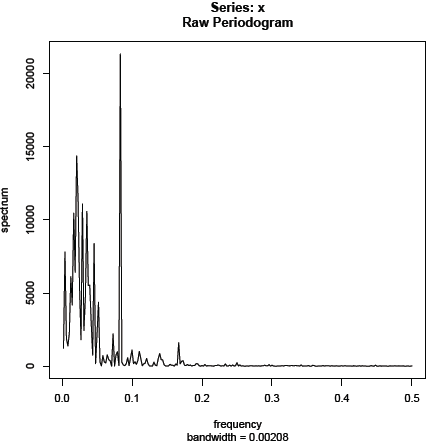 The next plot is a smoothed periodogram using a Daniell kernel with m = 4. 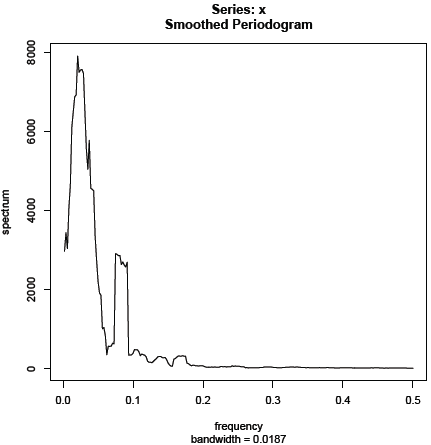 The next plot is a smoothed periodogram using two passes of a Daniell kernel with m = 4 on each pass.

Note!
It is even more smoothed than previously. 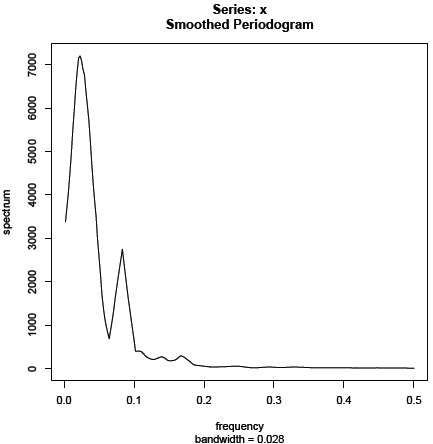 To learn where the two dominant peaks are located, assign a name to the mvspec output and then you can list it. For instance,

These two commands will put vertical dotted lines onto the (estimated) spectral density plot at the approximate locations of the peak densities. 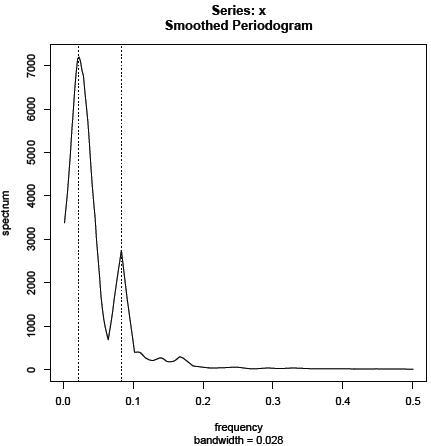 We’ve smoothed enough, but for demonstration purposes, the next plot is the result of

This uses two passes of a modified Daniell kernel with length L = 13 (so m = 6) each time. The plot is a bit smoother, but not by much. The peaks, by the way, are in exactly the same places as in the plot immediately above. 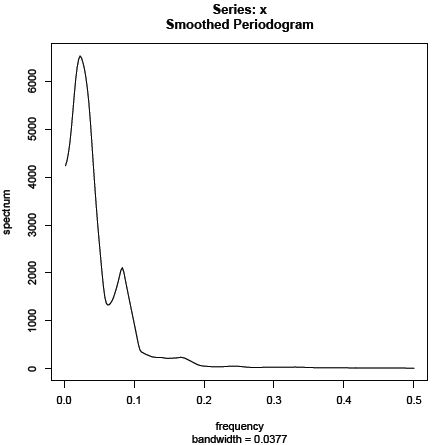 It’s definitely possible to smooth too much. Suppose that we were to use a modified Daniell kernel of total length = 73 (m = 36). The command is

The result follows. The peaks are gone! 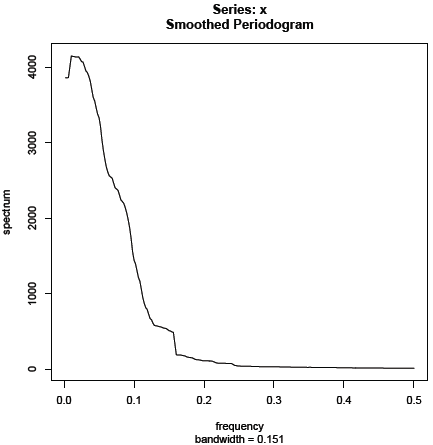 In R, parametric estimation of the spectral density is easily done with the command/function spec.ar. A command like spec.ar(x, log="no") will cause R to do all of the work. Again, to identify peaks we can assign a name to the spec.ar results by doing something like specvalues=spec.ar(x, log ="no").

For the fish recruitment example, the following plot is the result.

The appearance of the estimated spectral density is about the same as before. The estimated El Nino peak is located at a slightly different place – the frequency is about 0.024 for a cycle of about 1/.024 = about 42 months.

A series should be de-trended prior to a spectral analysis. A trend will cause such a dominant spectral density at a low frequency that other peaks won’t be seen. By default, the R command mvspec performs a de-trending using a linear trend model. That is, the spectral density is estimated using the residuals from a regression done where the y-variable = observed data and the x-variable = \(t\). If a different type of trend is present, a quadratic for instance, then a polynomial regression could be used to de-trend the data before the estimated spectral density is explored.

Note!
The R command spec.ar does not perform a de-trending by default.

Application of Smoothers to Raw Data

Note that the smoothers described here could also be applied to raw data. The Daniell kernel and its modifications are simply moving average (or weighted moving average) smoothers.