6.3.4 - Analysis of Deviance and Model Selection

In this part of the lesson we will focus on model selection. Fitting all the models from the previous section to the delinquency data, we obtain the following fit statistics.

The above table is an example of "analysis-of-deviance" table. This is like ANOVA table you have seen in linear regressions or similar models, where we look at the difference in the fit statistics, e.g. F-statistic, due to dropping or adding a parameter. In this case, we are checking for the change in deviance and if it is significant or not.

If a pair of models is nested (i.e. the smaller model is a special case of the larger one) then we can test

to a χ2 distribution with degrees of freedom equal to

This is exactly similar to testing whether a reduced model is true versus whether the full-model is true, for linear regression. Recall that full model has more parameters and setting some of them equal to zero the reduced model is obtained. Such models are nested, or hierarchical. The method described here holds ONLY for nested models.

The goal is to find a simple model that fits the data. For this purpose, it helps to add p-values to the analysis-of-deviance table. Here are the p-values associated with the G2 statistics:

From this table, we may conclude that:

Based on this table, we should choose to represent our data by the S model, because it’s the simplest one that fits the data well, thus D is conditionally independent of B given S.

But let us temporarily turn our attention to the saturated model to see how we can interpret the parameters. We can write this model as

where π is the probability of delinquency,

is the main effect for B, and

are the main effects for S.

Let us fit this model in SAS (see scout.sas):

The table of coefficients is shown below:

Here is the R code in the R program scout.R that corresponds to scout4.sas:

The coefficient estimates from the output are shown below:

How do we interpret these effects? Referring back to equation (5),

we see that the log-odds of delinquency for each S × B group are:

In other words, β1 gives the effect of scouting on delinquency when S = low. The estimate of β1 in the SAS output agrees with the B × D odds ratio for S = low,

The effect of scouting for S = medium, however, is

and the effect of scouting for S = high is

Estimates of these latter two effects do not directly appear in the SAS or R output. How can we get them?

Adding the covb option to the model statement in PROC LOGISTIC will cause SAS to print out the estimated covariance matrix. In R, one can use summary function and call the object cov.scaled (see scout.R code).

For example, since this is the saturated model we know that the odds-ratio for given the S=medium scouting level is:

Please note that we can certainly reduce the precision with which we are reporting these values to let's say about 4 decimal points. The values above were extracted from the R output for the estimated covariance matrix, i.e.,

Another way is to recode the model so that the estimates of interest and their standard errors appear directly in the table of coefficients. Suppose that we define the following dummy variables:

Then we fit the model

Notice that this new model does not include an intercept; an intercept would cause a collinearity problem, because X1 + X3 + X5 = 1. Under this new coding scheme, the log-odds of delinquency for each S × B group are:

SAS code for fitting this new model is shown below (see scout.sas).

In the model statement, notice the use of the noint option to remove the intercept. The estimated table of coefficients is shown below.

Here is the R code from the R program scout.R that corresponds to scout5.sas: 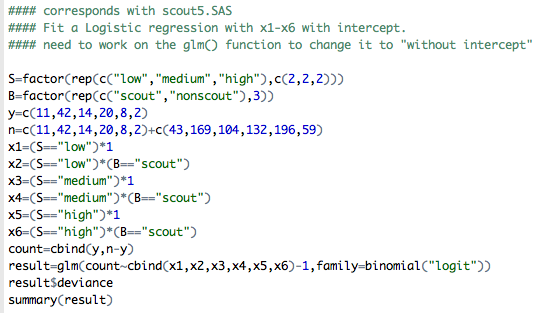 In R, you can exclude the intercept by including "-1" in the formula as seen in the code above. The estimated table of coefficients is shown below.

These type of analysis, models and parameter interpretations extend to any k−way table. More specifically tables where we have a binary response and many other categorical variables that can have many different levels.

This is a special example of a multiple logistic regression where we have more than one explanatory variable, but they are all categorical.

However, the more optimal procedure for logistic regression would be to use Likelihood ratio test (LRT) for testing elimination of variables, as we described with the boys scout example. If there are many categorical predictors, the sparseness can be a problem for these automated algorithms. You can also use AIC and BIC for model selection. These will be discussed along with the log-linear models later. For an example of a larger dataset, and more on Model Selection, see handouts relevant for the Water Level Study data (water.sas and water.txt):

In the next lesson we will deal with logistic regression with continuous covariates and other advanced topics.