The Regression Model with AR Errors

Suppose that yt and xt are time series variables. A simple linear regression model with autoregressive errors can be written as

So, the model can be written

Note!
This generalizes to the multiple linear regression structure as well. We can have more than one x-variable (time series) on the right side of the equation. Each x-variable is adjusted in the manner described below.

Examining Whether This Model May be Necessary

Theory for the Cochrane-Orcutt Procedure

A simple regression model with AR errors can be written as

\(\Phi(B)\) gives the AR polynomial for the errors.

If we multiply all elements of the equation by \(\Phi(B)\), we get

Note!
In the last of the equations just given \(\beta_{0}\) is an unknown constant that does not move in time. Thus it is not affected by any backshift operation. That’s why the B operations were not applied in that equation.

Using the items just defined, we can write the model as

Remember that \(w_t\) is a white noise series, so this is just the usual simple regression model.

We use results from model (2) to iteratively adjust our estimates of coefficients in model (1).

This procedure is attributed to Cochrane and Orcutt (1949) and is repeated until the estimates converge, that is we observe a very small difference in our estimates between iterations. When the errors exhibit an AR(1) pattern, the cochrane.orcutt function found within the orcutt package in R iterates this procedure.

For a higher order AR, the adjustment variables are calculated in the same manner with more lags. For instance, suppose the residuals were found to have an AR(2) with estimated coefficients 0.9 and -0.2. Then the y- and x- variables for the adjustment regression would be

There are n = 76 annual observations in sequence. Suppose x is a leading economic indicator (predictor) for a country and y = a measure of the state of the economy. The following plot shows the relationship between x and y for 76 years. 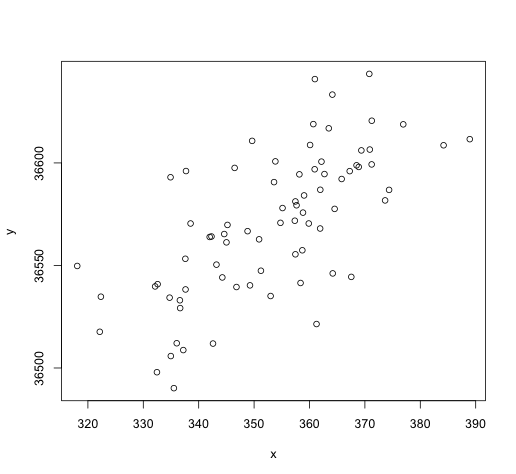 Download the data used in the following code: econpredictor.dat , econmeasure.dat

A potential problem with the Cohrane-Orcutt procedure is that the residual sum of squares is not always minimized and therefore we now present a more modern approach following our text.

Estimating the Coefficients of the Adjusted Regression Model with Maximum Likelihood

The method used here depends upon what program you're using. In R (with gls and arima) and in SAS (with PROC AUTOREG) it's possible to specify a regression model with errors that have an ARIMA structure. With a package that includes regression and basic time series procedures, it's relatively easy to use an iterative procedure to determine adjusted regression coefficient estimates and their standard errors. Remember, the purpose is to adjust "ordinary" regression estimates for the fact that the residuals have an ARIMA structure.

Carrying out the Procedure

The basic steps are:

The following plot shows the relationship between a simulated predictor x and response y for 100 annual observations. 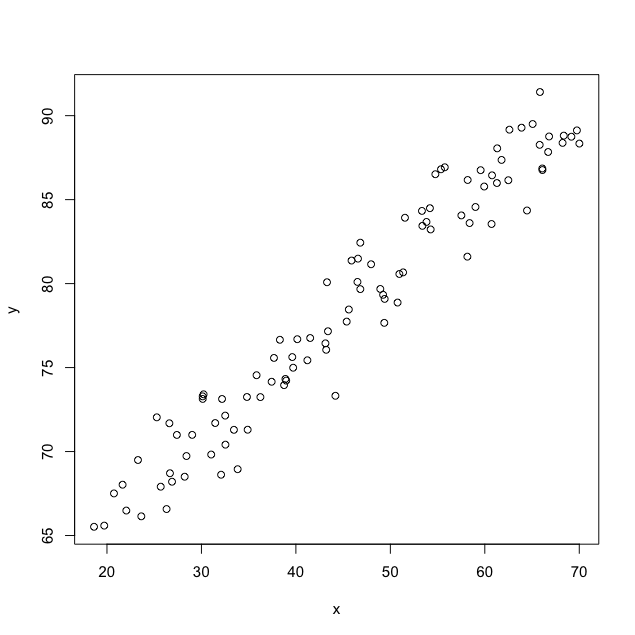 Note that in this example it might work better to use an ARIMA model as we have a univariate time series, but we’ll use the approach of these notes for illustrative purposes. We analyze the glacial varve data described in Example 2.5, page 62 of the text. The response is a measure of the thickness of deposits of sand and silt (varve) left by spring melting of glaciers about 11,800 years ago. The data are annual estimates of varve thickness at a location in Massachusetts for 455 years beginning 11,834 years ago. There are nonconstant variance and outlier problems in the data, so we might try a log transformation with hopes of stabilizing the variance and diminishing the effects of outliers. Here’s a time series plot of the log10 series.

Centering the time variable creates uncorrelated estimates of the linear and quadratic terms in the model. Regression results found using R are: 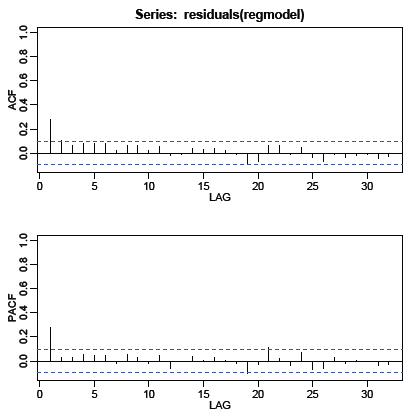 The ARIMA results for a AR(1): 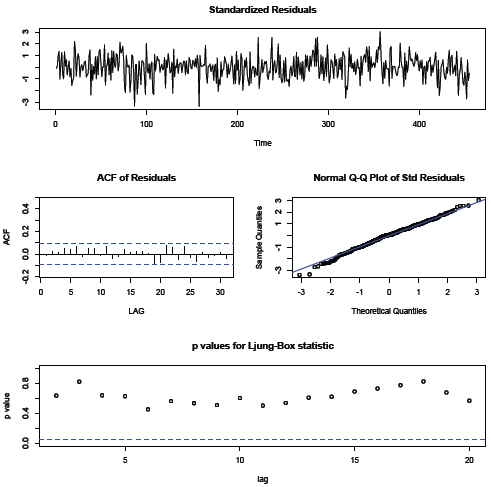 Note!
The predicted y is a linear function of time and the residual at the previous time.

The data are in varve.dat in the Week 8 folder, so you can reproduce this analysis or compare to a MA(1) for the residuals.