Consider the following experimental setting: “A study of teacher self-rating of classroom control is made where investigators want to compare Eastern vs. Western US regions, the type of school (Public vs. Private) and 2 selected Teachers at each school. Each teacher submits scores from 2 classes that they teach.”

East vs West US makes sense as a fixed effect, and so does private vs. public schools.However, the investigators are probably not interested in testing for significant differences among individual teachers, but more realistically they would be interested in how much variation there is among teachers (a random effect).

So this ANOVA as a mixed model, one that includes both fixed and random effects. In this example, we would include teacher as a random effect nested within the factorial (fixed effect) treatment combinations effects of Region and School type.

Let’s say the data (Schools Data) were as follows:

In SAS we would set up the ANOVA as:

Here we see that the fixed effects appear in the model statement, and the nested random effect appears in the random statement.

We get the following partial output:

The results for hypothesis tests for the fixed effects appear as:

and a hypothesis test for the random effect appears as:

The last part of the output shown above is produced by the “covtest” option in the proc mixed statement and indicates that the \(H_0 \colon \sigma_{teacher}^{2} = 0\) cannot be rejected \(\alpha = 0.05\) (the p-value was 0.2626). It is important to point out here that this result is inconsistent with the result that we see in the ANOVA table above, where the F-test for teacher(region*school_type) is significant (P > F = 0.0257). The reason is that the covtest option is using the Wald Z test which is dubious at best. It is very un-trustworthy with small numbers of levels of the random factor.

So how should we test the Null Hypothesis for the significance of the random effect? All the advice that I have been able to gather on this topic points to shying away from using the covtest option for testing the significance of a random effect unless you have very large numbers of levels of the random effect, and instead relying on the traditional F test from the ANOVA table. I included the covtest option here to illustrate this problem in working with mixed models.

Given that the region*school_type interaction is significant, we could go ahead and use the PLM procedure with:

to generate the Tukey mean comparisons and produce the groupings (letterings) to identify what means differ significantly.

In Minitab, specifying the mixed model is a little different. 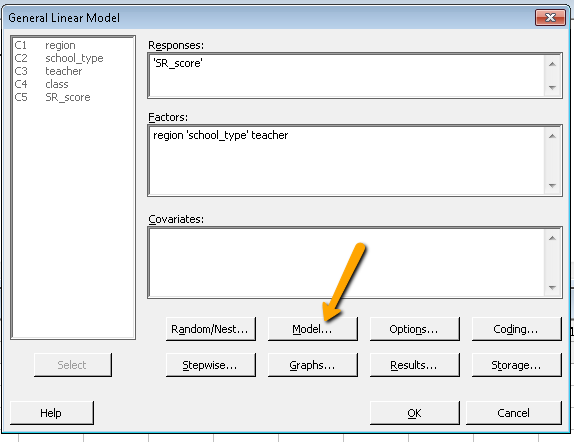 In the next panel we can create interaction terms. At this point all factors are assumed to fixed effects. You will get a prompt: 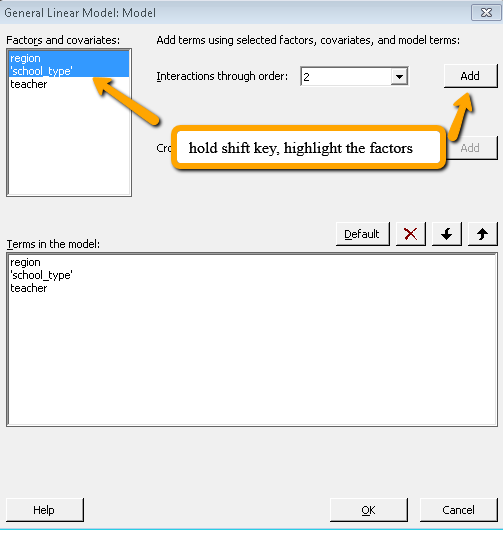 To create nested terms and to specify which effects are random effects, we have to use a different tab: 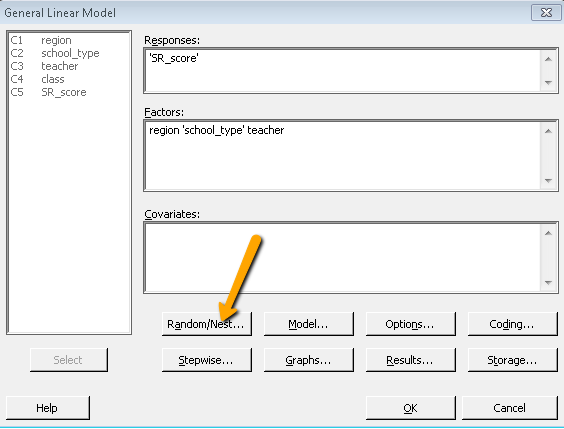 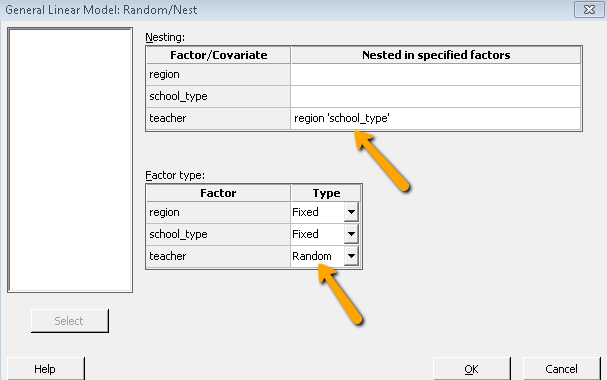 This would correspond to:

Minitab Output for the mixed model:

Analysis of Variance for SR_score, using Adjusted SS for Tests

Minitab’s results are in agreement with SAS Proc Mixed.