As an example (adapted from Hicks, 1964), consider an experiment where an electrical component is subjected to different temperatures for different amounts of time. They wanted to have 3 replications and used a RCBD design (replication = block). However, it was impractical to run individual treatment combinations, and instead they opted to set the oven a temperature and then take out randomly selected components at different times. This process was repeated for each temperature until a replication was complete.

The data (Bake Time Data) were:

In SAS, we could specify the full model with the following statements:

but there is a problem:

We can’t retrieve the residual (there are 0 d.f. for error). If repeat observations are made within the split plots, then a separate error term can be estimated. However, it is important to keep in mind that tests of replication effects are not of interest, but are being isolated in the ANOVA to reduce the error variance. As a result, the model that is usually run in this design drops out the rep × split plot factor and the rep*whole-plot factor*split-plot factor terms. This has the effect of combining these interactions with the true error variance, for a working error term.

So the Split-Plot RCBD ANOVA can be obtained as:

In this model the rep*time and rep*temp*time are included in the residual error. Notice that the correct error term for the F test of the treatment applied to whole plots is the block × treatment interaction (assuming blocks are a random effect).

and then fill in the dialogue boxes provided: 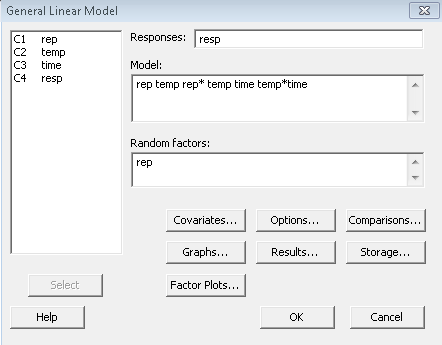 Analysis of Variance for resp, using Adjusted SS for Tests

Note! Minitab is not able to generate mean comparisons for the whole-plot factor – we need the Tukey-Kramer Adjustment and Minitab does not currently have this capability. SAS should be used for the Split-plot designs