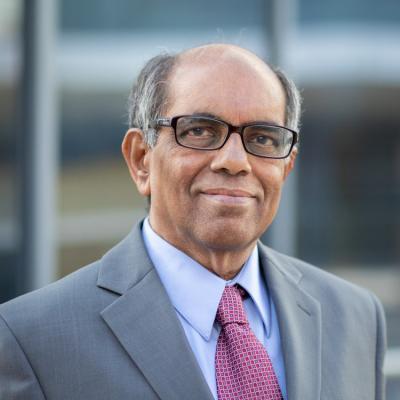 Jogesh Babu is a Distinguished Professor at Penn State.

Jogesh Babu has diverse research interests in both statistics and probability, and in their applications to problems in genetics, astronomy, and astrophysics. He has contributed extensively to probabilistic number theory (Erdös Number1), resampling methods, nonparametric methods, and asymptotic theory. Babu's work in astrostatistics includes multivariate methods for satellite data on Gamma-ray bursts, faint source detection in multi-epoch data, analysis of astronomical data cubes, quantitative comparison of source properties to compare data with astrophysical theories, and regression methods to calibrate steps in the cosmic distance ladder.

Babu and an astronomer colleague coined the term "Astrostatistics" in the mid-1990s, when they published a book by the same name. Babu has led a year-long program 2016-17 Program on Statistical, Mathematical and Computational Methods for Astronomy (ASTRO) at the Statistical and Applied Mathematical Sciences Institute (SAMSI). See the SAMSI Press release dated February 24, 2016, on the research directions including exoplanets, Gravitational Waves. He also led the first semester-long program on Astrostatistics at SAMSI in 2006. Babu led the development of VOStat, a web-based service providing a suite of tools allowing astronomers to use both simple and sophisticated statistical routines on large datasets.

Babu joined Penn State as Professor in 1985. He was a professor at Indian Statistical Institute, Calcutta, during 1982-1985. To enhance the dialog between astronomers and statisticians on important research issues Babu and Feigelson organized international conferences on `Statistical Challenges in Modern Astronomy' at Penn State in August 1991, June 1996, July 2001, June 2006, and June 2011. Babu organized annual summer schools in statistics for astronomers since 2005 at Penn State. The 2007 Summer school in statistics for astronomers received the 2007 University Continuing Education Association (Mid-Atlantic Region) award for exemplary non-credit program development.

He has also organized summer schools in statistics for astronomers in collaboration with the Indian Institute of Astrophysics in July 2007, 2008, 2010, and 2013 at Vainu Bappu Observatory located near the village of Kavalur in India. Astrostatistics schools were also organized in 2011 at The Space Telescope Science Institute (STScI) in Baltimore, and in 2013 in Valparaiso, Chile. The audio episode of the SynTalk interview on The Future Of Prediction was recorded on March 18, 2017. It is also available online at SoundCloud. Interviewed on camera for Astronomy & Astrophysics 50 years young documentary - https://www.youtube.com/watch?v=bQHoCyh4BoU&t=16s