Population
A population is any large collection of objects or individuals, such as Americans, students, or trees about which information is desired.

Parameter
A parameter is any summary number, like an average or percentage, that describes the entire population.

Sample
A sample is a representative group drawn from the population.

Statistic
A statistic is any summary number, like an average or percentage, that describes the sample.

The sample mean, \(\bar{x}\), and the sample proportion \(\hat{p}\) are two different sample statistics. For example:

What was the prevalence of smoking at Penn State University before the 'no smoking' policy? Section

Are the grades of college students inflated? Section

Is there a linear relationship between birth weight and length of gestation? Section

Consider the relationship between the birth weight of a baby and the length of its gestation: 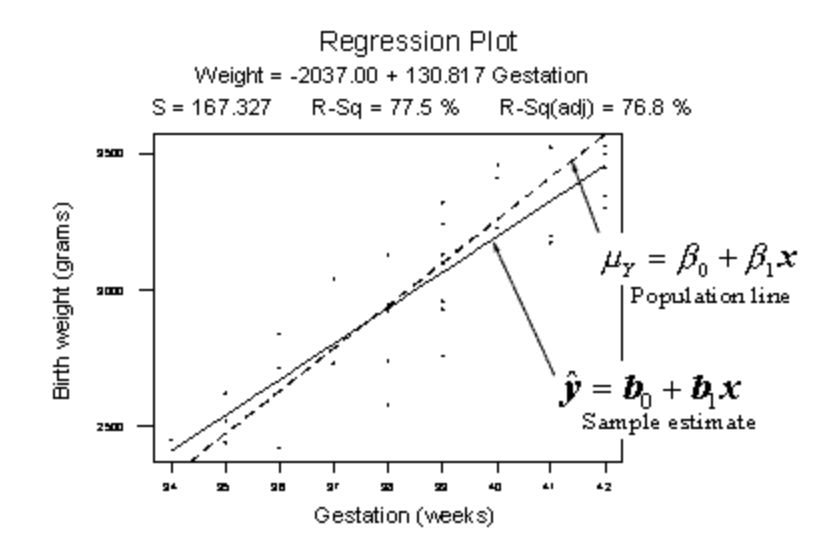 The dashed line summarizes the (unknown) relationship —\(\mu_Y = \beta_0+\beta_1x\)— between birth weight and gestation length of all births in the population. The solid line summarizes the relationship —\(\hat{y} = \beta_0+\beta_1x\)— between birth weight and gestation length in our random sample of 32 births. The goal of linear regression analysis is to use the solid line (the sample) in hopes of learning about the dashed line (the population).

There are two ways to learn about a population parameter.

1) We can use confidence intervals to estimate parameters.

2) We can use hypothesis tests to test and ultimately draw conclusions about the value of a parameter.

"There is enough statistical evidence to conclude that the mean normal body temperature of adults is lower than 98.6 degrees F."

We review these two methods in the next two sections.