To introduce the idea of variability, consider this example. Two vending machines A and B drop candies when a quarter is inserted. The number of pieces of candy one gets is random. The following data are recorded for six trials at each vending machine:

Pieces of candy from vending machine A:

Pieces of candy from vending machine B: 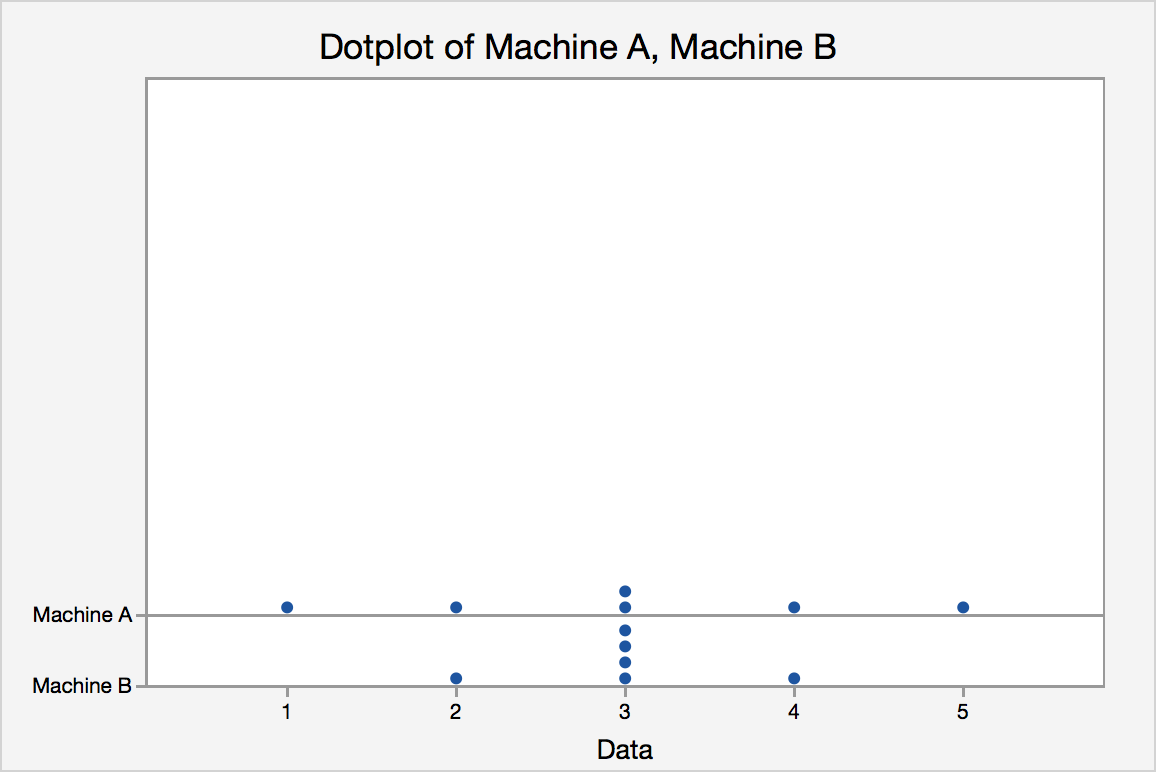 They have the same center, but what about their spreads?

There are many ways to describe variability or spread including:

Range
The range is the difference in the maximum and minimum values of a data set. The maximum is the largest value in the dataset and the minimum is the smallest value. The range is easy to calculate but it is very much affected by extreme values.
\(Range = maximum - minimum\)

Like the range, the IQR is a measure of variability, but you must find the quartiles in order to compute its value.

Note! The IQR is not affected by extreme values. It is thus a resistant measure of variability.

Find the IQR for the final exam scores example.

Variance
the average squared distance from the mean

$\sigma^2$ is often estimated by using the sample variance.

Calculate the variance for these final exam scores.

Next, use a table to sum the squared distances. Click to show the full table.

Calculate the sample variances for the data set from vending machines A and B yourself and check that it the variance for B is smaller than that for data set A. Work out your answer first, then click the graphic to compare answers.

It has the same unit as the \(x_i\)’s. This is a desirable property since one may think about the spread in terms of the original unit.

\(\sigma\) is estimated by the sample standard deviation \(s\) :

What happens to measures of variability if we add or multiply each observation in a data set by a constant? We learned previously about the effect such actions have on the mean and the median, but do variation measures behave similarly? Not really.

When we add a constant to all values we are basically shifting the data upward (or downward if we subtract a constant). This has the result of moving the middle but leaving the variability measures (e.g. range, IQR, variance, standard deviation) unchanged.

Above we considered three measures of variation: Range, IQR, and Variance (and its square root counterpart - Standard Deviation). These are all measures we can calculate from one quantitative variable e.g. height, weight. But how can we compare dispersion (i.e. variability) of data from two or more distinct populations that have vastly different means?

A popular statistic to use in such situations is the Coefficient of Variation or CV. This is a unit-free statistic and one where the higher the value the greater the dispersion. The calculation of CV is:

Comparing the standard deviations the Per Sheet appears to have much less variability in pricing. However, the mean is also much smaller. The coefficient of variation allows us to make a relative comparison of the variability of these two pricing schemes: