For instance, using the previous example for tar content, if the ANOVA test results in a significant difference in average tar content between the cigarette brands, a follow up analysis would be needed to determine which brand mean or means differ in tar content. Plus we would want to know if one brand or multiple brands were better/worse than another brand in average tar content. To complete this analysis we use a method called multiple comparisons.

Note! We don’t go in the theory behind the Tukey method. Just note that we only use a multiple comparison technique in ANOVA when we have a significant result.

In the next section, we present an example to walk through the ANOVA results.

If the data entered in Minitab are in different columns, then in Minitab we use:

Test the hypothesis that the means are the same vs. at least one is different for both labs. Compare the two labs and comment.

We are testing the following hypotheses:

The assumptions were discussed in the previous example.

The following is the output for one-way ANOVA for Lab Precise:

The p-value for this test is less than 0.0001. At any reasonable significance level, we would reject the null hypothesis and conclude there is enough evidence in the data to suggest at least one mean tar content is different.

But which ones are different? The next step is to examine the multiple comparisons. Minitab provides the following output:

The Tukey pairwise comparisons suggest that all the means are different. Therefore, Brand C has the highest tar content and Brand A has the lowest.

The p-value for this test is rather large, 0.176. With a significance level of, say 5%, we would fail to reject the null hypothesis and conclude that there is not enough evidence in the data to suggest the mean tar content for the three brands are different.

20 young pigs are assigned at random among 4 experimental groups. Each group is fed a different diet. (This design is a completely randomized design.) The data are the pig's weight, in kilograms, after being raised on these diets for 10 months (pig_weights.txt). We wish to determine whether the mean pig weights are the same for all 4 diets.

First, we set up our hypothesis test:

\(H_a\colon \text { at least one mean weight is different}\)

Here are the data that were obtained from the four experimental groups, as well as, their summary statistics:

The smallest standard deviation is 2.16, and the largest is 3.03. Since the rule of thumb is satisfied here, we can say the equal variance assumption is not violated. The description suggests that the samples are independent. There is nothing in the description to suggest the weights come from a normal distribution. The normal probability plots are: 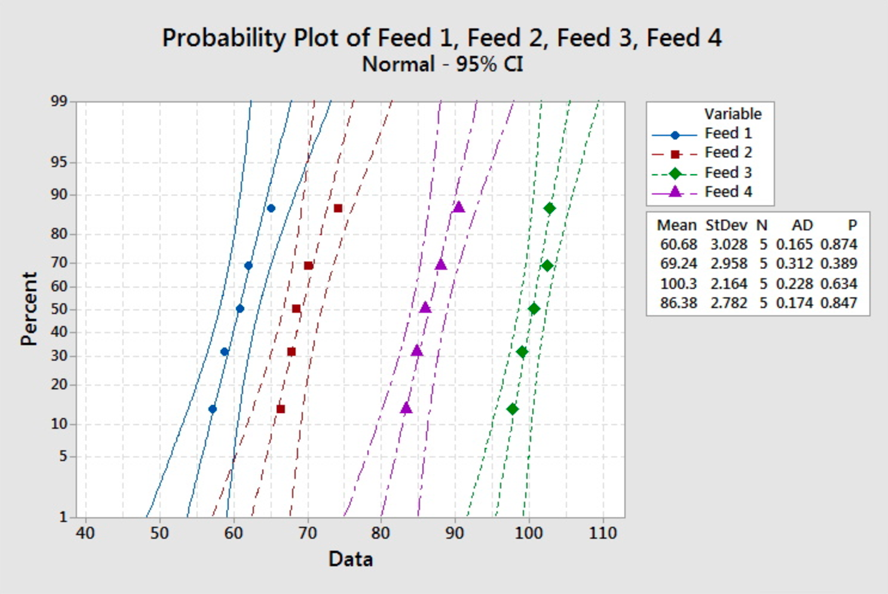 There are no obvious violations from the normal assumption, but we should proceed with caution as the sample sizes are very small.

The ANOVA output is:

The p-value for the test is less than 0.001. With a significance level of 5%, we reject the null hypothesis. The data provide sufficient evidence to conclude that the mean weights of pigs from the four feeds are not all the same.

To answer these questions we analyze the multiple comparison output (the grouping information) and the interval graph.

Each of these factor levels are associated with a grouping letter. If any factor levels have the same letter, then the multiple comparison method did not determine a significant difference between the mean response. For any factor level that does not share a letter, a significant mean difference was identified. From the lettering we see each Diet Type has a different letter, i.e. no two groups share a letter. Therefore, we can conclude that all four diets resulted in statistically significant different mean pig weights. Furthermore, with the order of the means also provided from highest to lowest, we can say that Feed 3 resulted in the highest mean weight followed by Feed 4, then Feed 2, then Feed 1. This grouping result is supported by the graph of the intervals. 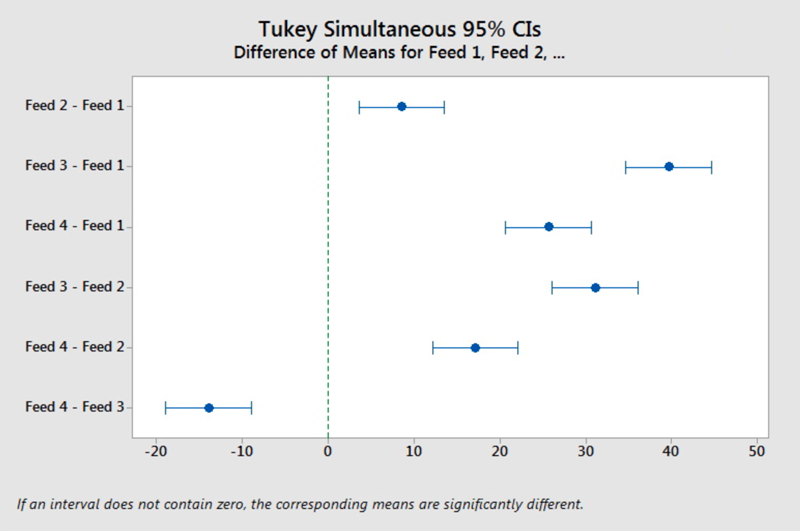 In analyzing the intervals, we reflect back on our lesson in comparing two means: if an interval contained zero, we could not conclude a difference between the two means; if the interval did not contain zero, then a difference between the two means was supported. With four factor levels, there are six possible pairwise comparisons. (Remember the binomial formula where we had the counter for the number of possible outcomes? In this case \(4\choose 2\) = 6). In inspecting each of these six intervals, we find that all six do NOT include zero. Therefore, there is a statistical difference between all four group means; the four types of diet resulted in significantly different mean pig weights.