Why would we want to compare two population variances? There are many situations, such as in quality control problems, where you may want to choose the process with smaller variability for a variable of interest.

One of the essential steps of a test to compare two population variances is for checking the equal variances assumption if you want to use the pooled variances. Many people use this test as a guide to see if there are any clear violations, much like using the rule of thumb.

When we introduce inference for two parameters before, we started with the sampling distribution. We will not do this here. The details of this test are left out. We will simply present how to use it.

To compare the variances of two quantitative variables, the hypotheses of interest are:

The last two alternatives are determined by how you arrange your ratio of the two sample statistics.

We will rely on Minitab to conduct this test for us. Minitab offers three (3) different methods to test equal variances.

Bonett’s test and Levene’s test are both considered nonparametric tests. In our case, since the tests we will be considering are based on a normal distribution, we are expecting to use the F-test. Again, we will need to confirm this by plotting our sample data (i.e., using a probability plot).

Using the data in the packaging time from our previous discussion on two independent samples, we want to check whether it is reasonable to assume that the two machines have equal population variances.

Recall that the data are given below as (machine.txt): 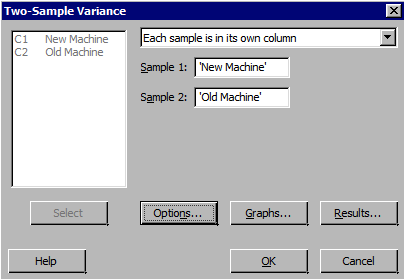 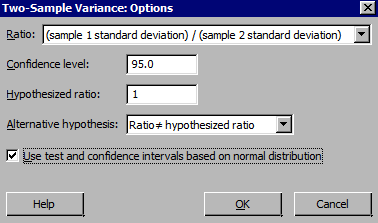 The Minitab Output for the test for equal variances is as follows (a graph is also given in the output that provides confidence intervals and p-value for the test. This is not shown here):

F method was used. This method is accurate for normal data only.

How do we interpret the Minitab output?

The p-value provided is that for the alternative selected i.e. two-sided. If the alternative were one sided, for example if our alternative in the above example was "ratio less than 1", then the p-value would be half the reported p-value for the two-sided test, or 0.393.

Minitab provided the results only from the F-test since we checked the box to assume normal distribution. Regardless, the hypotheses would be the same for any of the test options and the decision method is the same: if the p-value is less than alpha, we reject the null and conclude the two population variances are not equal. Otherwise, if the p-value is large (i.e. greater than alpha) then we fail to reject the null and can assume the two population variances are equal.

In this example, the p-value for the F-test is very large (larger than 0.1). Therefore, we fail to reject the null hypothesis and conclude that there is not enough evidence to conclude the variances are different.