Then, our null hypothesis involves just a single mean, which we'll denote \(\mu_D\), the mean of the differences: 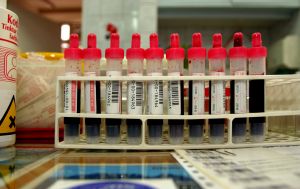 Blood samples from \(n=10\) = 10 people were sent to each of two laboratories (Lab 1 and Lab 2) for cholesterol determinations. The resulting data are summarized here:

Is there a statistically significant difference at the \(\alpha=0.01\) level, say, in the (population) mean cholesterol levels reported by Lab 1 and Lab 2?

And, the Minitab output for this example looks like this: