As is generally the case, let's motivate the method for calculating a confidence interval for a population median \(m\) by way of a concrete example. Suppose \(Y_1<Y_2<Y_3<Y_4<Y_5\) are the order statistics of a random sample of size \(n=5\) from a continuous distribution. Our work from the previous lesson tells us that \(Y_3\) serves as a good point estimator of the median \(m\). Let's see what we can come up with for a confidence interval given we have these order statistics at our disposal. Well, suppose we suggested that the interval constrained by the first and fifth order statistics, that is, \((Y_1, Y_5)\) would serve as a good interval. How confident can we be that the interval \(Y_1, Y_5)\) would contain the unknown population median \(m\)? To answer that question, we simply need to calculate the following probability:

The binomial p.m.f. (or, alternatively, the binomial table) makes the calculation straightforward: 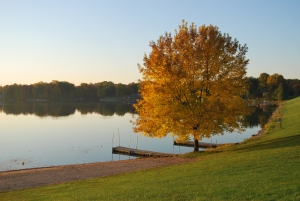 An ecology laboratory studied tree dispersion patterns for the sugar maple whose seeds are dispersed by the wind. In a 50-meter by 50-meter plot, the laboratory researchers measured distances between like trees yielding the following distances, in meters and in increasing order, for 19 sugar maple trees:

Find a reasonable confidence interval for the median.

In general, we should aim to get a confidence coefficient at least 90%, but as close to 95% as possible. And, we shouldn't really "shop around" for an interval after we've collected the data. We should decide in advance which confidence interval we are going to use, and commit to use it even after the data have been collected.

All of our confidence coefficient calculations have involved binomial probabilities. It stands to reason, then, that if our sample size \(n\) is larger than 20, say, we could use the normal approximation to the binomial distribution. In our case, \(W\), the number of \(X_i<m\), follows a binomial distribution with mean and variance: 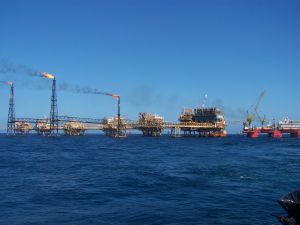 A sample of 26 offshore oil workers took part in a simulated escape exercise, resulting in the following data on time (in seconds) to complete the escape:

Use the normal approximation to the binomial to find the approximate confidence coefficient associated with the \((Y_8, Y_{18})\) confidence interval for the median \(m\). (The data are from the journal article "Oxygen Consumption and Ventilation During Escape from an Offshore Platform," Ergonomics 1997: 281-292.)

In this case, the mean and variance are:

respectively. Therefore, the approximate confidence coefficient for the interval \((Y_8, Y_{18})\) is:

which can be simplified to:

We can be approximately 94.6% confident that the median time of all escapes is between 359 and 375 seconds.