the data are normally distributed (or if not, the underlying distributions are not too badly skewed, and \(n\) and \(m\) are large enough), and the population variances \(\sigma^2_X\) and \(\sigma^2_Y\) can't be assumed to be equal,

where the \(r\) degrees of freedom are approximated by:

Let's take a look at an example. 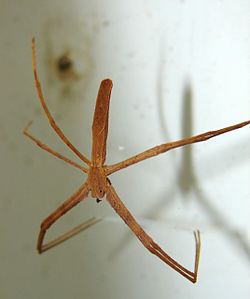 Let's return to the example, in which the feeding habits of two-species of net-casting spiders are studied. The species, the deinopis and menneus, coexist in eastern Australia. The following summary statistics were obtained on the size, in millimeters, of the prey of the two species:

What is the difference in the mean sizes of the prey (of the entire populations) of the two species?

degrees of freedom. Then, using a \(t\)-table (or alternatively, statistical software such as Minitab), we get:

Now, substituting the sample means, sample variances, and sample sizes into the formula for Welch's \(t\)-interval:

We can be 95% confident that the difference in the mean prey size of the two species is between −0.87 and 3.35 mm. Hmmm... you might recall that our two-sample pooled \(t\)-interval was (−0.852, 3.332). Comparing the two intervals, we see that they aren't a whole lot different. That's because the sample variances aren't really all that different. Many statisticians follow the rule of thumb that if the ratio of the two sample variances exceeds 4, that is, if:

Asking Minitab to calculate Welch's \(t\)-interval for \(\mu_X-\mu_Y\) require just a minor modification to the commands used in asking Minitab to calculate a two-sample pooled \(t\)-interval. We simply skip the step in which we click on the box Assume equal variances. Again, the commands required depend on whether the data are entered in two columns, or the data are entered in one column with a grouping variable in a second column. Since we've already learned how to ask Minitab to calculate a confidence interval for \(\mu_X-\mu_Y\) for both of those data arrangements, we'll take a look instead at the case in which the data are already summarized for us, as they are in the spider and prey example above.

When the Data are Summarized