So far, we've formulated the idea, as well as the theory, behind least squares estimation. But, now we have a little problem. When we derived formulas for the least squares estimates of the intercept \(a\) and the slope \(b\), we never addressed for what parameters \(a\) and \(b\) serve as estimates. It is a crucial topic that deserves our attention. Let's investigate the answer by considering the (linear) relationship between high school grade point averages (GPAs) and scores on a college entrance exam, such as the ACT exam. Well, let's actually center the high school GPAs so that if \(x\) denotes the high school GPA, then \(x-\bar{x}\) is the centered high school GPA. Here's what a plot of \(x-\bar{x}\), the centered high school GPA, and \(y\), the college entrance test score might look like:

Well, okay, so that plot deserves some explanation:

So far, in summary, we are assuming two things. First, among the entire population of college students, there is some unknown linear relationship between \(\mu_y\), (or alternatively \(E(Y)\)), the average college entrance score, and \(x-\bar{x}\), centered high school GPA. That is:

Now, our least squares line isn't going to be perfect, but it should do a pretty good job of estimating the true unknown population line:

Now, if we want to derive confidence intervals for \(\alpha\) and \(\beta\), as we are going to want to do on the next page, we are going to have to make a few more assumptions. That's where the simple linear regression model comes to the rescue.

So that we can have properly drawn normal curves, let's borrow (steal?) an example from the textbook called Applied Linear Regression Models (4th edition, by Kutner, Nachtsheim, and Neter). Consider the relationship between \(x\), the number of bids contracting companies prepare, and \(y\), the number of hours it takes to prepare the bids:

Note that if \(X=45\) bids are prepared, then the expected number of hours it took to prepare the bids is:

The normal curves drawn for each value of \(X\) are meant to suggest that the error terms \(\epsilon_i\), and therefore the responses \(Y_i\), are normally distributed. That's a second assumption.

Did you also notice that the two normal curves in the plot are drawn to have the same shape? That suggests that each population (as defined by \(X\)) has a common variance. That's a third assumption. That is, the errors, \(\epsilon_i\), and therefore the responses \(Y_i\), have equal variances for all \(x\) values.

There's one more assumption that is made that is difficult to depict on a graph. That's the one that concerns the independence of the error terms. Let's summarize!

In short, the simple linear regression model states that the following four conditions must hold:

Did you happen to notice that each of the four conditions is capitalized and emphasized in red? And, did you happen to notice that the capital letters spell L-I-N-E? Do you get it? We are investigating least squares regression lines, and the model effectively spells the word line! You might find this mnemonic an easy way to remember the four conditions.

If the four conditions of the simple linear regression model hold true, then:

are maximum likelihood estimators of \(\alpha\) and \(\beta\).

The simple linear regression model, in short, states that the errors \(\epsilon_i\) are independent and normally distributed with mean 0 and variance \(\sigma^2\). That is:

Therefore, the likelihood function is:

which can be rewritten as:

Now, that negative sign in front of that summation on the right hand side:

are maximum likelihood estimators of \(\alpha\) and \(\beta\) under the assumption that the error terms are independent, normally distributed with mean 0 and variance \(\sigma^2\). As was to be proved!

What about the (Unknown) Variance \(\sigma^2\)? Section 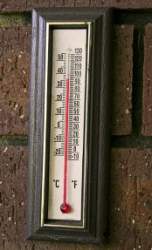 We know that there is a perfect relationship between degrees Celsius (C) and degrees Fahrenheit (F), namely:

As you can see, for the plot on the left, the Fahrenheit temperatures do not vary or "bounce" much around the estimated regression line. For the plot on the right, on the other hand, the Fahrenheit temperatures do vary or "bounce" quite a bit around the estimated regression line. It seems reasonable to conclude then that the brand of thermometers on the left will yield more precise future predictions of the temperature in Fahrenheit.

Now, the variance \(\sigma^2\) is, of course, an unknown population parameter. The only way we can attempt to quantify the variance is to estimate it. In the case in which we had one population, say the (normal) population of IQ scores:

we would estimate the population variance \(\sigma^2\) using the sample variance:

We have learned that \(s^2\) is an unbiased estimator of \(\sigma^2\), the variance of the one population. But what if we no longer have just one population, but instead have many populations? In our bids and hours example, there is a population for every value of \(x\):

In this case, we have to estimate \(\sigma^2\), the (common) variance of the many populations. There are two possibilities − one is a biased estimator, and one is an unbiased estimator.

The maximum likelihood estimator of \(\sigma^2\) is:

(It is a biased estimator of \(\sigma^2\), the common variance of the many populations.

We have previously shown that the log of the likelihood function is:

Setting the derivative equal to 0, and multiplying through by \(2\sigma^4\):

As was to be proved!

The mean square error, on the other hand:

is an unbiased estimator of \(\sigma^2\), the common variance of the many populations.

We'll need to use these estimators of \(\sigma^2\) when we derive confidence intervals for \(\alpha\) and \(\beta\) on the next page.