One of the primary things that distinguishes the test for independence, that we'll be studying on this page, from the test for homogeneity is the way in which the data are collected. So, let's start by addressing the sampling schemes for each of the two situations.

In this case, we are interested in conducting a test of homogeneity for testing the null hypothesis:

against the alternative hypothesis:

For this example, the sampling scheme involves:

Now, lets consider a different example to illustrate an alternative sampling scheme. Suppose 395 people are randomly selected, and are "cross-classified" into one of eight cells, depending into which age category they fall and whether or not they support legalizing marijuana:

In this case, we are interested in conducting a test of independence for testing the null hypothesis:

against the alternative hypothesis \(H_A \colon\) Variable A is not independent of variable B.

For this example, the sampling scheme involves:

Note that, in this case, both the row totals and column totals are random... it is only the total number n sampled that is fixed in advance. It is this sampling scheme and the resulting test for independence that will be the focus of our attention on this page. Now, let's jump right to the punch line. 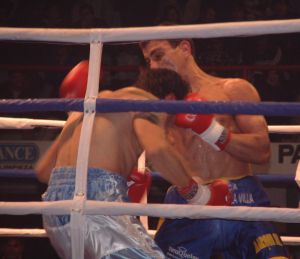 The same chi-square test works! It doesn't matter how the sampling was done. But, it's traditional to still think of the two tests, the one for homogeneity and the one for independence, in different lights.

Just as we did before, let's start with clearly defining the notation we will use.

With the notation defined as such, we are now ready to formulate the chi-square test statistic for testing the independence of two categorical variables.

for testing the independence of two categorical variables, one with h levels and the other with k levels, follows an approximate chi-square distribution with (h−1)(k−1) degrees of freedom.

We should be getting to be pros at deriving these chi-square tests. We'll do the proof in four steps. 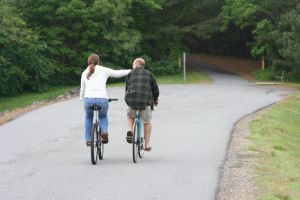 Is age independent of the desire to ride a bicycle? A random sample of 395 people were surveyed. Each person was asked their interest in riding a bicycle (Variable A) and their age (Variable B). The data that resulted from the survey is summarized in the following table:

Is there evidence to conclude, at the 0.05 level, that the desire to ride a bicycle depends on age?

Here's the table of expected counts:

which results in a chi-square statistic of 8.006:

then Minitab will display typical chi-square test output that looks something like this: