In this example, we are comparing the SAT scores of students who said that they would prefer to win an Academy Award, a Nobel Prize, or an Olympic gold medal.

The example uses the StudentSurvey dataset provided by the Lock5 textbook.

Let's apply the five-step hypothesis testing process to this example.

The assumptions for a one-way between-groups ANOVA are:

Assumption: Samples are independent: Each student selected either Olympic, Academy, or Nobel. Each student is in only one group and those groups are in no way matched or paired. This assumption is met.

Use Minitab to run a one-way ANOVA with the Minitab file: StudentSurvey.mpx

The following will describe the output within the context of the five step hypothesis testing process.

Given that you are comparing \(k\) independent groups, the null and alternative hypotheses are:

Equal variances were assumed for the analysis

You should get the following output:

The factor information tells us that our factor is the Award.

We can conclude that the group means are not all equal.

Remember that ANOVA is just an omnibus test. It only tells that us there is a difference somewhere. To determine where the differences are you would have to look at the Tukey pairwise comparison output.

The Tukey Simultaneous Tests table provides the adjusted 95% confidence intervals. These are the confidence intervals and p-values you should be looking at when you're making pairwise comparisons. These are adjusted to take into account there are three different pairwise tests being performed simultaneously. To determine which groups are statistically significant we can look at the adjusted p-value. In this case, the only p-value less than 0.05 is the Olympic - Nobel pairwise comparison. The means of the Olympic and Nobel group are significantly different. 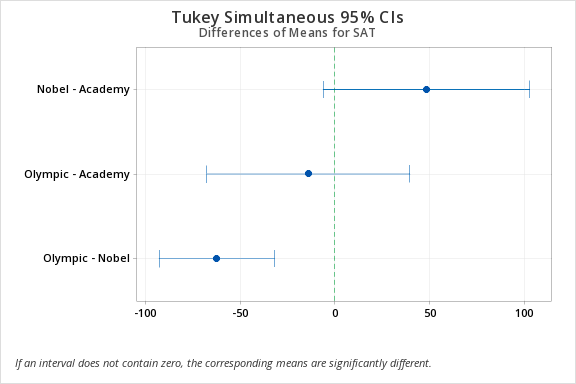