What is the impact of exercise on the human immune system? To answer this very global and general research question, one has to first quantify what "exercise" means and what "immunity" means. Of course, there are several ways of doing so. For example, we might quantify one's level of exercise by measuring his or her "maximal oxygen uptake." And, we might quantify the quality of one's immune system by measuring the amount of "immunoglobin in his or her blood." In doing so, the general research question is translated into a much more specific research question: "How is the amount of immunoglobin in the blood (y) related to maximal oxygen uptake (x)?"

Because some researchers were interested in answering the above research question, they collected the following Exercise and Immunity data set on a sample of 30 individuals:

The scatter plot of the resulting data: 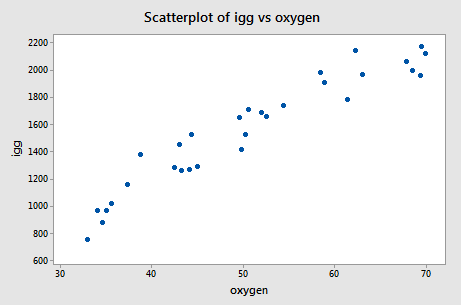 As usual, the error terms \(\epsilon_i\) are assumed to be independent, normally distributed, and have equal variance \(\sigma^{2}\).

As the following plot of the estimated quadratic function suggests: 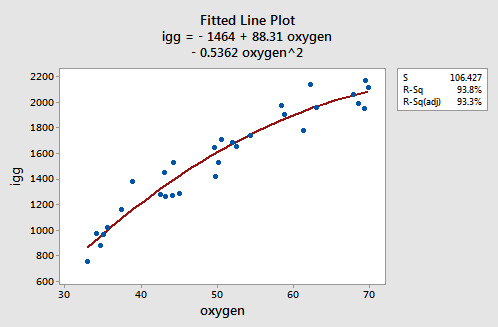 the formulated regression function appears to describe the trend in the data well. The adjusted \(R^{2} \text{-value}\) is 93.3%.

So far, we have kept our heads a little bit in the sand! If we look at the output we obtain upon regressing the response y = igg on the predictors oxygen and \(\text{oxygen}^{2}\):

we quickly see that the variance inflation factors for both predictors — oxygen, and oxygensq — are very large (99.9 in each case). Is this surprising to you? If you think about it, we've created a correlation by taking the predictor oxygen and squaring it to obtain oxygensq. That is, just by the nature of our model, we have created a "structural multicollinearity."

The scatter plot of oxygensq versus oxygen: 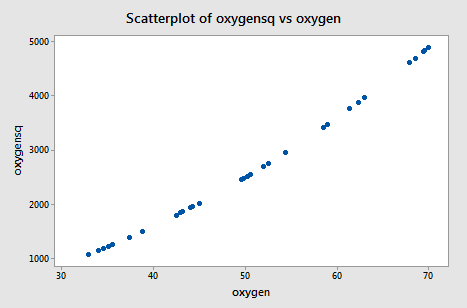 Pearson correlation of oxygen and oxygensq = 0.995

illustrates the intense strength of the correlation that we induced. After all, we just can't get much more correlated than a correlation of r = 0.995!

Therefore, to center the predictor oxygen, we merely subtract 50.64 from each oxygen value in our data set. Doing so, we obtain the centered predictor, oxcent, say:

Wow! It really works! The scatter plot of oxcentsq versus oxcent:

Having centered the predictor oxygen, we must reformulate our quadratic polynomial regression model accordingly. That is, we now formulate our model as:

and the error terms \(\epsilon_i\) are independent, normally distributed and have equal variance \(\sigma^{2}\). Note that we add asterisks to each of the parameters to make it clear that the parameters differ from the parameters in the original model we formulated.

Let's see how we did by centering the predictors and reformulating our model. Recall that — based on our original model — the variance inflation factors for oxygen and oxygensq were 99.9. Now, regressing y = igg on the centered predictors oxcent and oxcentsq:

we see that the variance inflation factors have dropped significantly — now they are 1.05 in each case.

Because we reformulated our model based on the centered predictors, the meaning of the parameters must be changed accordingly. Now, the estimated coefficients tell us:

As the following plot of the estimated quadratic function suggests: 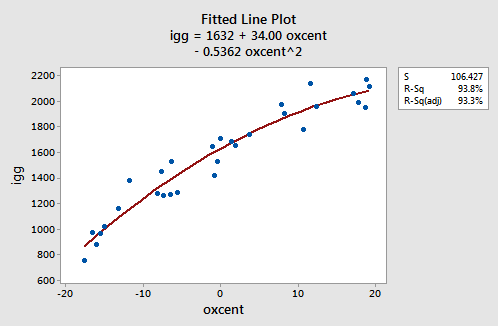 the reformulated regression function appears to describe the trend in the data well. The adjusted \(R^{2} \text{-value}\) is still 93.3%. 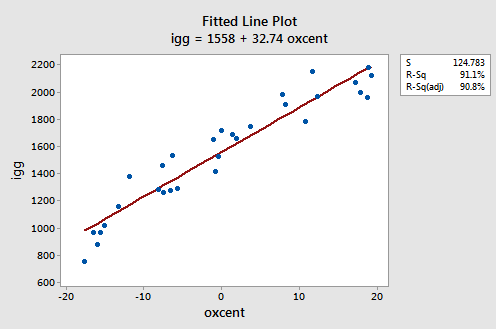 can be easily obtained. In fact, it can be shown algebraically that the estimated coefficients of the original model equal:

For example, the estimated regression function for our reformulated model with centered predictors is:

Then, since the mean of the oxygen values in the data set is 50.64:

it can be shown algebraically that the estimated coefficients for the model with the original (uncentered) predictors are:

That is, the estimated regression function for our quadratic polynomial model with the original (uncentered) predictors is:

Let's use our model to predict the immunoglobin level in the blood of a person whose maximal oxygen uptake is 90 ml/kg. Of course, before we use our model to answer a research question, we should always evaluate it first to make sure it means all of the necessary conditions. The residuals versus fits plot:

shows a nice horizontal band around the residual = 0 line, suggesting the model fits the data well. It also suggests that the variances of the error terms are equal. And, the normal probability plot:

suggests that the error terms are normally distributed. Okay, we're good to go — let's use the model to answer our research question: "What is one's predicted IgG if the maximal oxygen uptake is 90 ml/kg?"

A word of warning. Be careful — because of changes in direction of the curve, there is an even greater danger of extrapolation when modeling data with a polynomial function.

Then, to see if the simpler first-order model (a "line") is adequate in describing the trend in the data, we could test the null hypothesis:

But then … if a polynomial term of a given order is retained, then all related lower-order terms are also retained. That is, if a quadratic term is deemed significant, then it is standard practice to use this regression function:

and not this one:

That is, we always fit the terms of a polynomial model in a hierarchical manner.