Some researchers at UCLA conducted a study on cyanotic heart disease in children. They measured the age at which the child spoke his or her first word (x, in months) and the Gesell adaptive score (y) on a sample of 21 children.

Is there evidence of a relationship between age at first word and Gesell adaptive score? That is, should we reject the null hypothesis H0: β1 = 0 against the alternative hypothesis HA: β1 ≠ 0 at the 0.05 level? The resulting data (adaptive.txt) yield an ANOVA F-statistic of 13.20.

Because the F-test is large regardless of whether the population slope is positive or negative, the F-test is always a one-sided test. Therefore, because we want to conduct the hypothesis test at the 0.05 level, the appropriate cumulative probability to enter is 0.95. The number of numerator degrees of freedom is always 1 for a simple linear regression model with one predictor. Because there are 21 measurements in the sample, the appropriate number of denominator degrees of freedom is 19. Therefore, your Minitab dialog box should look like: 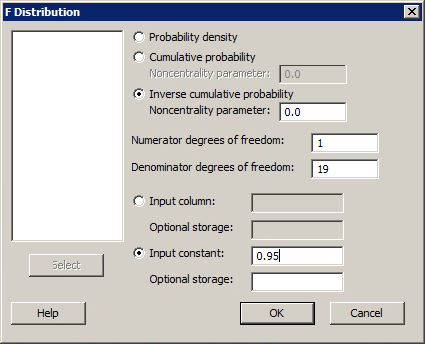 In this case, Minitab tells us that the F-critical value is: